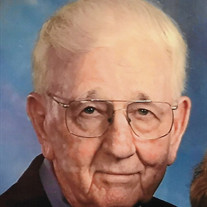 Don Cannon, our sweet, loving dad, papa, and beloved husband, passed away from this life in the early morning hours on Sunday, August 23rd, 2020, to begin his eternal life with his Savior. Don Cannon was born on June 7, 1937 in New Liberty, Oklahoma to Ray and Myrtle Cannon. He grew up and graduated from Crawford High School in Crawford, Oklahoma in 1955. Following graduation, Don moved to Oklahoma City to attend Draughon's Business College. After completing his schooling Don moved back to Western Oklahoma and went to work for Northfork Electric in Sayre, Oklahoma. He then went on to work in the Elk City area as General Manager for Gene Smith Sr. of Gene Smith Chevrolet. It wasn't long before Don took off on his own adventure and purchased a Ford Dealership in Cordell, Oklahoma in 1959 and became the youngest car dealer/owner in the state of Oklahoma at the age of 22. Later, Don acquired half ownership of the Ford Dealership in Sayre, Oklahoma. He also owned a used car dealership in Sentinel, Oklahoma. Don employed many family members throughout the years, including his father, Ray Cannon, brother-in-law, Roy Feltman, and several nephews. Much time was spent in the service bay of the Ford Dealership preparing Don's dragster for weekend races. He was an avid racer. Don's car, at times, was a little more important than work, you could say! Don enjoyed meeting new customers day in and day out, but not quite as much as one in particular who walked in one day to purchase a 1965 baby blue mustang. She drew his attention over all the others and the rest is history. Don married Jan Feltman in April of 1968. Don and Jan enjoyed working along side one another at the Dealership, flying their Cessna 182 to dinner with friends and family, or flying for work related reasons, or maybe even to Vegas to catch an occasional Elvis show. The Cannon Family spent many years custom harvesting from Oklahoma to Colorado. Once Don's own farms were harvested, he would head North with his family. Many great memories were made during those years. Don enjoyed traveling and meeting new people every summer, lifelong friendships were made. In 1989, Don opened a new Dealership in Cordell, Oklahoma, Don Cannon Motors, Inc. He made the switch from Ford to Chevy and continued to raise his family in the new business. He enjoyed yet again working along side many of his family members including, his wife, Jan, his children, Nikki, Alicia and Rick, son-in-law, Rob, nephew, Kerry, grandson, Cory and many friends. Years at the Dealership produced many lifelong friendships and opportunities to help others in the community. Don appreciated every one of his customers who walked through the doors over the years and treasured the lasting friendships he made. Don spent his life working as hard as any man could, farming and running the dealerships or two; but his love was to be with his family. His wife, children and grandchildren. Many hours were spent around the pool watching them swim and play. He never missed a ballgame or program, he showed up for absolutely everything no matter how far or how long. He was his family' s#1 fan and it showed in everything he did. There was nothing he wouldn't do for one of his own. He will be dearly missed by all who knew him, but most of all, by those who knew and loved him. Survivors include his wife, Jan, of the home Son: Rick Cannon & wife Christie of Yukon, OK Daughters: Julie Malone & husband Danny of Mansfield, TX Nikki (Cannon) Kuehne & husband Rob of Cordell, OK Alicia (Cannon) Holt & husband Tanner of Cordell, OK Grandchildren: Amy (Cannon) Valentine & husband Josh of OKC, OK Cory Cannon & wife Debby of Yukon, OK Casey Malone of Fort Worth, TX Kaitlin Kuehne of Cordell, OK Raydon Kuehne of Cordell, OK Ava Willingham of Cordell, OK Georgia Willingham of Cordell, OK Great-Grandchildren: Molly Cannon of Yukon, OK Henry Cannon of Yukon, OK Preceded in death by his Parents, Sister: Billie Rae Davis; Brother-in-law: Jack Davis; Nephew: Vernon Davis; Granddaughter: Marissa Danielle Malone; and his all time hero: Dale Earnhardt Sr. Funeral: 2:00 p.m., Thursday, August 27, 2020 First Baptist Church Cordell, Oklahoma Interment: Lawnview Cemetery Cordell, Oklahoma Visitation: 9:00 a.m. ~ 8:00 p.m., Tuesday, August 25, 2020 9:00 a.m. ~ 8:00 p.m., Wednesday, August 26, 2020 Family welcoming guest from 5:00 p.m. ~ 7:00 p.m. Ray and Martha's Funeral Home Cordell, Oklahoma

Don Cannon, our sweet, loving dad, papa, and beloved husband, passed away from this life in the early morning hours on Sunday, August 23rd, 2020, to begin his eternal life with his Savior. Don Cannon was born on June 7, 1937 in New Liberty,... View Obituary & Service Information

The family of Don Cannon created this Life Tributes page to make it easy to share your memories.