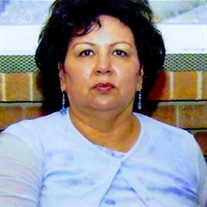 Dolores Gene BigBow, known by many as Dee, was born to Harding and Pearl BigBow on November 22, 1946 in Lawton, OK. Dee, the eldest sister in the family, was raised alongside her siblings at their home in Carnegie, OK. While growing up, she enjoyed participating in extracurricular activities including playing basketball and cheerleading. Dee was interested in classes ahead of her time, including woodshop, learning skills that would allow her to share in her father's work. She also loved music from the era, and you could count on her taking over the television to watch American Bandstand. After Dee graduated high school, she attended Cameron University and continued to break the mold by becoming both a career-oriented woman as well as a mother. She moved to Oklahoma City, where she began employment with the Federal government. While progressing in her career by working for the Indian Health Service (IHS), Occupational Safety and Health Administration (OSHA), and eventually the Department of Housing and Urban Development (HUD), Dee was blessed with her children: Angela, John and Feresheteh. During this busy time in her life, her interest in music, comedy and style never faded. She would always watch Soul Train, I Love Lucy and British sitcoms with her family. Eventually, Dee moved from Oklahoma City to Dallas, where she continued her career with HUD. While in Texas, she gained another addition to her family, her son Jamal. Unfortunately, she also experienced the heartbreaking loss of her father. The shock of the loss was so great that she was left searching for answers. Since her childhood, Dee had been a Christian and a member of the Kiowa Chapter of the Native American Church, but this tragedy led her to seek out a much stronger and personal relationship with God. Even though she lived in Texas, she travelled often to Oklahoma over the weekends so that she could strengthen her ties to family and churches in the area. She also became involved with churches in Texas, and it was evident to all those around her that Dee placed God first in her life. As Dee's relationship with God grew, she developed a quiet strength and intense resolve. Dee cared deeply for the people in her life. She made it a point to positively impact the lives of others around her. She was present; she sought out people in need and listened to what they were going through. She supported people through prayer, donations of food and clothes, and offered financial help. Dee was happiest being around friends and family, and she was always willing to sacrifice for the people she loved. Although Dee left to be with the Lord on January 19, 2019, our lives are forever touched by her. Today, we celebrate her life and know that she is rejoicing with her loved ones in heaven. Dolores is survived by her children, Angela, John, Feresheteh and Jamal; her sisters, Rhodene, Harvetta and Jackie; her grandchildren, Haven, Jasmine, Jasmeen, Cecilia, Joseph, E'Naya and Aiden; and her great-grandson, E.J.

Dolores Gene BigBow, known by many as Dee, was born to Harding and Pearl BigBow on November 22, 1946 in Lawton, OK. Dee, the eldest sister in the family, was raised alongside her siblings at their home in Carnegie, OK. While growing up, she... View Obituary & Service Information

The family of Dolores Gene Timsah-Bigbow created this Life Tributes page to make it easy to share your memories.

Dolores Gene BigBow, known by many as Dee, was born to Harding...