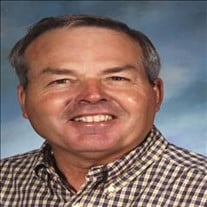 Dennis Wayne Dyer, a farmer, teacher and life-long resident of Carnegie, OK, passed away at the age of 71 on Thursday, October 1, 2020 in Oklahoma City, OK. Dennis is survived by his wife Gloria Sage Dyer, his children, Dr. John Dennis Dyer and wife Christina of Old Tappan, NJ and Rebekah Marie Powers and husband Jay of Elgin, OK, David Sage and wife Debbie of Weatherford, OK and John Sage and wife Kristy of Carnegie, OK, his ten grandchildren: Layla, Emma, Nikolas, Haleigh, Shelby, Ashlyn, Ethan, Tate, Kyndall and Keityn, his sister Karen Edingfield of El Reno, OK, his sister-in-law Linda Dyer of Carnegie, OK and many other nephews, nieces and life-long friends. Dennis was born April 29, 1949 to George and Dorthay Schmidt Dyer. Dennis attended school in Alden, OK through 8th grade and then graduated with the class of 1967 from Carnegie High School. In 1972, he received his Bachelor's of Science degree Agronomy from Oklahoma State University and then his Master's Degree in Education from Southwestern State University. He taught public school for 26 years in Medicine Park and Carnegie, OK. He married his wife Gloria on February 13, 2000 in Carnegie, OK. He was a devoted husband, father and Sunday School teacher and enjoyed working with the Royal Ambassadors at First Baptist Church. In fact, every one of his Sunday school students would receive a trophy if they memorized all the books of the Bible. His strong relationship with God laid the foundation for valuing his relationship with family and friends above all else. Dennis never met a stranger and always had a good story to tell. He had a heart of gold and his main concern was always helping others. He selflessly gave his time and energy to care for and maintain the Alden Cemetery grounds for many years. He loved spending time with his family and was always willing to take his grandkids for another ride on the pony, to jump on the hay bales or go count the cows. Some of his favorite passions were farming and his cattle. Dennis loved watching old Westerns, eating at his favorite cafe Georgia's in Carnegie and restoring his 1964 Chevy Impala. He loved to tell every detail about racing cars as a teenager and giving a daily report to his 4th graders about the farm. For a job well done, he always had a special treat of a Jolly Rancher for all his students. He is predeceased by his brother Larry Dean Dyer and his parents George and Dorthay Dyer. A private funeral service will be held on October 6, 2020 at 11:00 a.m. To access the service via livestream, go to the FBC Carnegie Connection group at www.facebook.com or call the First Baptist Church at 580-654-1299. Donations can be made in honor of Dennis Dyer to the Alden Cemetery and sent to The Farmer's Bank, 31 West Main Street, Carnegie, OK 73015 or the Carnegie Memorial Fund and sent to P.O. Box 1061, Carnegie, OK 73015.

The family of Dennis Wayne Dyer created this Life Tributes page to make it easy to share your memories.

Dennis Wayne Dyer, a farmer, teacher and life-long resident of...