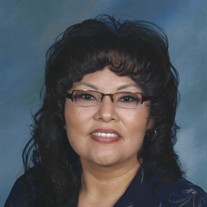 Delores (Del) Dee Sullivan, 50, of Anadarko was born November 11,1970 in Gallup, NM to Dennis and Rena Williams and passed from this life on Friday, January 15, 2021. She grew up on the Navajo Reservation in Ft Defiance, AZ and attended the Window Rock Unified School District where she participated in multiple sports most notably in volleyball and basketball. While in high school, she had the opportunity to travel across Europe to play basketball with a Navajo traveling team to compete against numerous European teams. When asked about the trip, she enjoyed seeing many historical sites and meeting the players from the other teams. She was a member of the 1988 Window Rock State Championship Basketball Team and went on to play for two years at Phoenix College until she was forced to stop playing due to a major knee injury. She was blessed with the birth of Kati Allison in 1993 and soon moved to Norman, OK where she began working locally and eventually came to work for the American Indian Head Start Quality Improvement Center in the American Indian Institute (AII) at the University of Oklahoma. Prior to that she worked in the main office of AII providing clerical and logistical support for numerous local grant projects, national native language and cultural based curriculum development workshops across the country. At the top of the steps outside the main AII office she met her future husband, David Sullivan, on the day he came in to interview for his position. They enjoyed working at AII together and always felt grateful to work on meaningful projects that ultimately supported tribal communities across the country - but ultimately the American Indian Institute was where their life together began. David and Del were married November 6, 1999 at the Glorietta Baptist Church in Oklahoma City, OK. The family of three quickly became four as they were blessed with the addition of daughter Hannah Tazbah Marie Sullivan in November of 2000. In 2001, the family moved to Anadarko where David began working for the Anadarko Public Schools as the Indian Education Director. Del continued working for AII to support the Anadarko Schools 21st Century Community Learning Centers grant project which was formed through a partnership between AII and the Anadarko district. This grant project eventually became the current ReachOut Afterschool Program. She joined the Anadarko Public School district soon after as a Special Education Paraprofessional and continued in that role until the 2018-2019 school year when she became a Special Education Teacher serving the youngest students, pre-K through 1st grade. She thoroughly enjoyed working with the little ones at Sunset Elementary and often grew so excited to see the progress they made. She learned from numerous mentors over the years and always believed every child could learn and succeed. Del volunteered countless hours during her years in Anadarko coaching little league teams and serving as an advisor for the Anadarko UNITY Council. She enjoyed coaching the young players in the community and especially delighted in guiding her daughters over the years. She was very proud to see them play and succeed on the court and in life. She was the perfect partner for David as they worked together to provide countless fond memories and life-changing experiences for many students. She was always willing to help whether it was cooking hotdogs for the students working on the UNITY haunted trail or being a stern mother figure for the UNITY Council members during the numerous trips to National Conferences and Mid Year Conferences in Washington, DC. Del was a firm believer in education and continued her educational career by completing a Bachelor of Arts from the University of Oklahoma in 2013. She completed the intensive training requirements of the Oklahoma State Department of Education's Special Education Boot Camp in 2017 and continued courses toward her teacher certification at the University of Oklahoma. In 2018, she started working on coursework toward a Masters in Special Education at Cameron University and continued until the Spring of 2020. Del was preceded in death by three brothers, Davis Williams, Levon Williams and Dwayne Williams, brother-in-law, Harrison Yazzie and her grandparents Bahe and Nellie Williams and James and Lucy Cleveland. She is survived by her husband, David Sullivan; her children, Kati and Hannah Sullivan; her father and mother, Dennis and Rena Williams; brothers, Daniel Williams, Darryl and wife Teresa Williams, Wade and wife Rachel Williams, and Aaron Williams; her sisters, Denise Williams and Lucyann and husband Lincoln Harjo; as well as numerous nieces and nephews. The family asks that everyone wear a mask and observe strict social distancing to protect those that are vulnerable to the virus. The service will be streamed by First Baptist Church. Officiating is: Pastor Cloyd Harjo, Jr., Pastor Ken Sullivan and Pastor Lynn Bellamy officiating. Burial will follow in Memory Lane Cemetery of Anadarko. Funeral: 11:00 am, Thursday, January 21, 2021 First Baptist Church, Anadarko, OK Graveside: 12:00 pm, Thursday, January 21, 2021 Memory Lane Cemetery, Anadarko, OK Under the direction of Ray and Martha's Funeral Home, Anadarko, OK

Delores (Del) Dee Sullivan, 50, of Anadarko was born November 11,1970 in Gallup, NM to Dennis and Rena Williams and passed from this life on Friday, January 15, 2021. She grew up on the Navajo Reservation in Ft Defiance, AZ and attended the... View Obituary & Service Information

The family of Delores Dee Sullivan created this Life Tributes page to make it easy to share your memories.