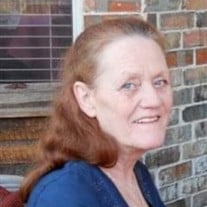 Deborah "Debbie" Kay Estep (Turner) 67, of Rocky, Oklahoma, passed away February 10, 2020 from a long battle of illness. She was born and raised in Houston, Texas to Mother; Arlene Loretta Bressler Turner and Father Aubrey James Turner. She was married to the love of her life Jack H. Estep Jr., whom was by her side until the very end. Debbie was a free spirit that lived life until life couldn't be lived anymore. Her laugh was contagious and to know her was to love her. She was a loving wife, mother and grandmother. Debbie will be deeply missed by all who knew and loved her. She is survived and loved by her husband Jack Estep of Rocky, OK Daughters: Heather Hunt -Kader, Summer Hunt, Holly Hunt, and Crystal Estep Sons-in-law: Joseph Howell, Wayne Hendrickson, and Adam Wright Grandchildren: Jordan Kader, Paige Lilly, Donavan Wells, Samuel Wells III, Aubrey Lilly, Kassidy Numrich, Jaylen Trujillo, Jaxson Hendrickson, Averie Trujillo, and Tinslie Howell Brothers; Charlie and Darren Turner Numerous nieces, nephews brother and sisters- in-law. She is preceded in death by her Mother: Arlene Turner, Father: Aubrey Turner, Son: William Teel Jr., Sisters: Vera Hine and Lois Butler. "I thought of you with love today, but that is nothing new, I thought about you yesterday, and days before that too. I think of you in silence. I often speak your name. All I have are memories, and your picture in a frame. Your memory is my keepsake, with which I'll never part. God has you in his keeping. I have you in my heart."

The family of Deborah Kay Estep created this Life Tributes page to make it easy to share your memories.