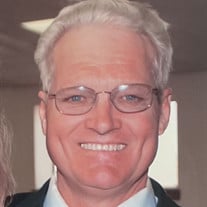 David Ray Dobbs was born on December 23rd, 1949 to Creta Diffendaffer Dobbs and Louis Dobbs in Gotebo, Oklahoma. He left this life January 13th, 2022 in Oklahoma City. David is preceded in death by his parents Creta and Louis Dobbs and his brother Lynn Dobbs. David is survived by his wife Damaris, his daughter Yvonne and her husband Curtis, his sons Kyle, and Andrew and his daughter Savannah. He also leaves behind five grandchildren Emily and her husband Nico, Ian, Ryan, Genevieve, and Sophia. David had the heart of a servant his entire life. He gave his life to the Lord at an early age and spent his entire life dedicated to his walk with the Lord. He met his wife Damaris when they were children and from this childhood friendship developed a beautiful love story that turned into a 50 year marriage. After serving his country during the Vietnam war, he returned home to marry his sweetheart Damaris. David was a hard worker that had the talent and ability to see what the community needed and filled the need. He started a successful windmill business traveling all over the prairies of Oklahoma. Later developing a successful company welding in the Oil Field where he worked until retirement. To know David was to love and admire him. He was a pillar of strength to his family but a gentle and generous soul to everyone he met. David never knew a stranger and was genuinely curious to know about everyone he met, whether, in line at the grocery store or picking up new parts at the home-improvement store. David was always making new friends. He knew how to make the best out of simple pleasures. When we think of David, we think of a servant's heart. David loved deeply and found some of his greatest joys around the kitchen table with close friends and family playing dominoes and rook. He was a friend, a husband and a father that you could count on. He sacrificed time, money and sleep to support his family and friends. David would get up during the bitter cold and blistering heat to provide not only for his family but anyone in need. He loved adventure and had an inquisitive spirit that wanted to learn what and how everything worked. He made the world a safer place for his family and friends. He loved with deep devotion that those who knew him will always remember when they think of David. There's no one that David would not help. He loved his wife like Christ loved the church and his children and grandchildren with a deep and abiding affection. He was loved deeply in return and he will be missed. We look forward to the day when we will see him again. Survivors include his wife, Damaris Dobbs of the home in Cordell, OK Children: Yvonne (Dobbs) Hughes & husband Curtis, Kyle Dobbs, Andrew Dobbs, and Savannah Dobbs Grandchildren: Emily (Hughes) Clere, Ian Hughes, Ryan Hughes, Genevieve Hughes, and Sophia Dobbs Sister: Colleen (Dobbs) Holman Brother: Weldon Dobbs Numerous nieces, nephews and other family members Preceded in death by his Parents: Louis Elmer and Creta Margret Dobbs, Brother: Lynn Dobbs, Sisters-in-law: Claudia (Sutton) Dobbs and Mona Dobbs, and Brother-in-law: Carol Holman Funeral: 2:00 p.m., Wednesday, January 19, 2022 Ray & Martha's Funeral Home Cordell, Oklahoma Interment: Lone Star Cemetery Rocky, Oklahoma

David Ray Dobbs was born on December 23rd, 1949 to Creta Diffendaffer Dobbs and Louis Dobbs in Gotebo, Oklahoma. He left this life January 13th, 2022 in Oklahoma City. David is preceded in death by his parents Creta and Louis Dobbs and his... View Obituary & Service Information

The family of David Ray Dobbs created this Life Tributes page to make it easy to share your memories.