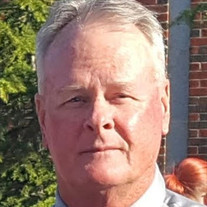 Craig Scott Mitchell left Hobart for Heaven on August 29, 2021 surrounded by family and friends at home. Craig was born in 1954 to David and Patricia (Baker) Mitchell at Swedish Hospital in Minneapolis, MN. He grew up in Bloomington, MN attending John F. Kennedy High School. He lived the Minneota life , ice skating, hockey (especially pond hockey), rollerblading, snow fort building and life up north at the cabin. He especially enjoyed the Boundary Waters Canoe Area with friends. He loved to watch Vikings football and NHL games. He was softball coach for daughter Daoma and also coached hockey for nephews and sons. He had a passion for music, especially blues and bluegrass and playing bass and drums. Having begun his career in construction at a young age, he became a member of the International Union of Bricklayers and Allied Craftsworkers. His handiwork can be seen across 3 states including Texas with many landmarks and buildings in Hobart, many parks, schools and institutions and the OU stadium. He was a steadfast, hard worker and had a special ability to do or fix anything, including cars and spent many hours devoted to helping those who needed it. Craig married Robyn (Metcalf) Mitchell in 1994 in Eureka Springs, Arkansas and moved to Hobart, OK in 1995 where they have resided since, raising four sons here. He was a member of First Baptist Church and later The Edge in Clinton, OK. He grew deep in faith, wisdom and prayer. Craig is preceded in death by his grandparents Ralph and Rachel Baker (whom he loved spending summers with in Buffalo, MN on the lake), grandmother Helen Jacobson, father David, and brother Wade. Survived by wife Robyn, mother Patricia, brother Dale and family, brother Wade's family, daughter Daoma Nix and family, sons Evan, Ian, Collin, and Karl Campbell and families, and grandchildren who know him as Papa Craig. Memorial service to be held later at Swedish MIssion Cemetery in Buffalo, MN with friends and family.

Craig Scott Mitchell left Hobart for Heaven on August 29, 2021 surrounded by family and friends at home. Craig was born in 1954 to David and Patricia (Baker) Mitchell at Swedish Hospital in Minneapolis, MN. He grew up in Bloomington, MN... View Obituary & Service Information

The family of Craig Scott Mitchell created this Life Tributes page to make it easy to share your memories.