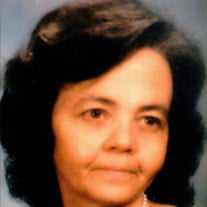 Clota Marie Anderson, 79, of Anadarko, took her heavenly flight on Thursday, August 1, 2019 with her family by her side. She was born to the late Charlie Logan and Mary Zilla Cotter On June 3, 1940 in Eakly, OK. With her independence starting very young, she followed her brother to school at age 3, where they let her join the class and she learned to read. She married Dixie Ray Anderson on February 5, 1957. She had five boys, Who were everything to her. She also helped in raising three of her nephews. And then as she started having grandchildren she loved having them every chance they could. Her family was a close family, who were always there for each other, celebrating the good times and pulling together in the hard times. One of her most favorite things to plan and look forward to was the family reunion that was started many years ago. She spent 29 1/2 years driving a bus for Anadarko public schools and Caddo/Kiowa vo-tech. During that time she also studied and passed the cosmetology state board test and then helped the instructor for a while. She put many walking miles over Anadarko and would even walk across town to the watering hole to get her Pepsi! Clota was preceded in death by her parents, three sisters and two brothers, her son Mikey, and many more love ones. She is survived by her four sons Jimmie, Charles, Ricky, and Randy, as well as many grandchildren, great-grandchildren, nephews and nieces for she always made it clear there were no halves or steps when it came to her family. Viewing will be at Ray and Martha's funeral home. Service to be held at 1 PM on Wednesday, August 7th at the Anadarko Assembly of God. Her final resting place will be at the Sappington Chapel Cemetery in Cowden, OK.

Clota Marie Anderson, 79, of Anadarko, took her heavenly flight on Thursday, August 1, 2019 with her family by her side. She was born to the late Charlie Logan and Mary Zilla Cotter On June 3, 1940 in Eakly, OK. With her independence starting... View Obituary & Service Information

The family of Clota Marie Anderson created this Life Tributes page to make it easy to share your memories.