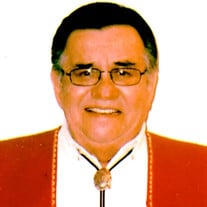 Clifford Reeder was born on March 15, 1940 in Lawton, Oklahoma and passed away on November 11, 2020 at his home in Oklahoma City. Clifford was the son of the late Helen Redhorn Kaulaity and the late Eugene Earling Reeder. He spent his early childhood at Buzzard Creek near Fort Cobb among his Kiowa family and at Scott, Oklahoma with his Caddo family. He attended school at East Walnut in Scott, Oklahoma. When Clifford was 10 years old, his family moved to Anadarko where he graduated high school. Clifford enlisted in the Marines in at Camp Pendleton, Oceanside, California, and served overseas. He served honorably and faithfully in the Marine Corps and sustained injuries in an Am-trak accident. In 1965, Clifford married Elizabeth Long Reeder in Oklahoma City. They had 2 children, Derek and Sonya Reeder, and made their home in Oklahoma City. Clifford worked in the dry cleaning business but was also involved with arts & crafts. He also tutored Native children and taught arts & crafts in the Oklahoma City schools in the 1970's. He was instrumental in organizing the first Indian Clinic in Oklahoma City as quoted by Dr. Pallicia: "Mr. Reeder was able to locate resources and recruit volunteers and organize them into the framework of a health clinic." Clifford and Liz were voted as Class Parents for the Class of 1983 Western Heights High School in Oklahoma City. Clifford enjoyed travelling to powwows around the country and always welcomed people to eat at his camp at Indian Hills. He was a member of the Kiowa Gourd Clan and Black Leggings Society. Clifford was a very proud member of the Native American Marine Corps Veterans. Clifford was a lifetime member of the Disabled American Veterans Chapter 29, Bethany Oklahoma and a lifetime member of the Oklahoma City Powwow Club. Clifford often served as Master of Ceremonies and Arena Director at various powwows and dances. He was Caddo and an enrolled member of the Kiowa Tribe. Clifford enjoyed fishing, shopping at thrift stores, and eating at local diners. He was also an avid softball player in his younger days. Clifford was preceded in death by his parents, son Derek Reeder, Sisters Lenora Kaulaity Catterson, Martha Kaulaity, Janice Kaulaity, Paula Reeder, and brother Donald Lonewolf. Clifford is survived by his wife Elizabeth, of the home, daughter Sonya Reeder Orange (Victor), Hammon, Oklahoma. Sisters Alpha Nelson, Sally Watt, Nema Kaulaity, Valerie Kaulaity, Cherie Kaulaity, and Carol Vetter. Brothers Alvin Kaulaity, Adam "Sonny" Kaulaity, Jesse Kaulaity, and George Kaulaity. Grandchildren Courtney Reeder, Marshal Reeder Williamson, Newman Reeder, Silas Miles, Janet Bullcoming and Anna Spottedwolf. He is also survived by his little brother Tushka Adair and little sisters Mahli & Homaiyi Adair and numerous adopted great-grandchildren. Burial will be at the Samone Cemetery.

Clifford Reeder was born on March 15, 1940 in Lawton, Oklahoma and passed away on November 11, 2020 at his home in Oklahoma City. Clifford was the son of the late Helen Redhorn Kaulaity and the late Eugene Earling Reeder. He spent his early... View Obituary & Service Information

The family of Clifford Lee Reeder created this Life Tributes page to make it easy to share your memories.