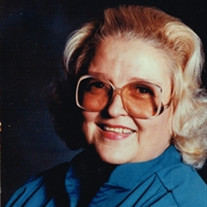 Clara Alice Traywick, 85, was born March 17, 1929, to Levi Nathaniel and Onie Day (Lindsay) Tingley. She passed from this life on Monday, April 14, 2014, to return to her Heavenly Father and reunite with other family members and friends who have gone on before. Clara was born, raised, attended school, raised her children and died in Anadarko. She attended O.C.W. in Chickasha where she received a bachelor's degree in art. Clara taught kindergarten and art classes at Broxton School. She was a member of the Church of Jesus Christ of Latter Day Saints for sixty-five years. Clara was a professional artist who did printing, portraits, murals, landscapes or any other kind of paintings. She even painted murals for several churches 6 x 8' to 8 x 8' in size. Clara made a portrait of the first Miss Indian America. It was 30 x 40� and hung in George Nigh's office during his time as governor in the Oklahoma Capitol Building. Clara loved children and spent many hours teaching them dance and piano at church. She also enjoyed square dancing and taught it to children and adults as well. She did all kinds of sewing including making her own clothes, men's suits and general sewing for others. She loved to cook and had a peanut butter fudge candy recipe of her very own that she taught all her children to cook. Clara was a great wife, mother and grandmother. She even adopted two of her grandchildren and helped to raise others. Clara was preceded in death by her parents, one infant son, Johnny Nash Traywick, one daughter, Anita Traywick, two grandchildren, Timbre Perry and Adam Wright, one brother, Lewis Tingley, two sisters, Leona and Melissa. Survivors include her husband, Douglas Eugene Traywick, Sr., of the home, whom she married April 9, 1945 and celebrated their sixty-ninth anniversary just last Wednesday, April 9, 2014; two sons, Douglas Eugene Traywick, Jr. of Oklahoma City and Russell Traywick, Sr. and his wife, Tess of Elgin; 12 grandchildren and 70 plus great and great great grandchildren. The funeral for Mrs. Traywick will be at 2 P.M., Thursday, April 17, 2014, at the Church of Jesus Christ of Latter Day Saints with President Mike Moore presiding. Burial will follow in the Memory Lane Cemetery. Online condolences may be left for the family at www.steversonfuneralhome.com.

Clara Alice Traywick, 85, was born March 17, 1929, to Levi Nathaniel and Onie Day (Lindsay) Tingley. She passed from this life on Monday, April 14, 2014, to return to her Heavenly Father and reunite with other family members and friends who... View Obituary & Service Information

The family of Clara Alice Traywick created this Life Tributes page to make it easy to share your memories.