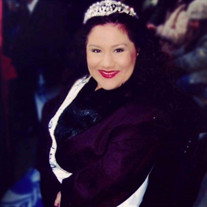 Cinda Lynn Hughes was born January 28th 1962 in Oklahoma City, Oklahoma. She is the daughter of Carolyn Gayle Toyebo Roulain. Cinda is of Kiowa and Cherokee decent. She is an enrolled member of the Kiowa Tribe of Oklahoma. She passed away peacefully in her home in Alexandria, Virginia on May 19, 2021. Ms. Hughes was born with a congenital birth defect called Arthrogryposis Multiplex Congenita. She attended Anadarko public schools and graduated in 1980. She was the first person with a disability to be mainstreamed in a public school. Though she was physically limited she did not let that keep her from excelling in school. Ms. Hughes was the first Native American student with a disability to be appointed to the Indian Affairs Advisory Council on Exceptional Students by the U.S Secretary of Interior. She won various awards and state championships for speech and poetry. She attended both Brigham Young University and University of Oklahoma where she studied Political Science. Ms. Hughes got her first professional job working for the Oklahoma State Senate as a receptionist. There she learned the ins and outs of passing legislation and utilized her position to help her Native community and people with disabilities. During her time working for the Senate Staff, she ran and won the title of Ms. Wheelchair America in 2004. Ms. Hughes utilized that platform to advocate for people with disabilities. She traveled all over the country to speak and advocate for not only people with disabilities but also native people with disabilities. Ms. Hughes was active member in the Democratic party and helped to push Natives to vote with Rock the Native Vote campaign. She served as an Affirmative Active Representative to the Oklahoma State Democratic Party. Her many honors include Co-Founder of the National Center for American Indians with Disabilities, Founding Member of the Federal Employees with Disabilities, former board member for the American Civil Liberties Union of Oklahoma, the 2007 National Youth Leadership Award by the National Indian Health Board, and was recognized in 2006 as an Emerging Leader by the American Association of People with Disabilities. Ms. Hughes was an avid reader and film buff, she also loved Broadway shows and musicals, which drew her to New York City for many personal vacations. She also loved music and was a diehard fan of the Steve Miller Band. Cinda Hughes is preceded in death by her grandparent Charles and Alice (Paddlety) Toyebo, her aunts Evelyn Longhorn, Wanona Toyebo, her uncles Carlos Toyebo, Charles "Buddy" Toyebo, and a sister Fran-Sharon Roulain. She is survived by her mother of the home Carolyn Roulain of Alexandria, Virginia, her brother Phillip Roulain of Alexandria, Virginia, sisters Deborah Cocker and husband Garrick of New Zealand, Leeandra Galutia and husband Luke of Oklahoma City, Oklahoma, and Maggie Roulain of Alexandria, Virginia, Her aunt Bernadine Rhoades and husband Everette of Oklahoma City, Oklahoma. She also is survived by many nieces, nephews, and cousins all of whom she loved dearly and her beloved cat Charley. Viewing: 11:00 am - 12:00 pm, June 1, 2021 The Church of Jesus Christ of Latter Day Saints, Anadarko, OK Funeral: 12:00 pm - 1:00 pm, June 1, 2021 The Church of Jesus Christ of Latter Day Saints, Anadarko, OK Interment: 1: 00 pm, June 1, 2021 RedStone Cemetery., Anadarko, OK Under the direction of Ray and Martha's Funeral Home, Anadarko, OK

Cinda Lynn Hughes was born January 28th 1962 in Oklahoma City, Oklahoma. She is the daughter of Carolyn Gayle Toyebo Roulain. Cinda is of Kiowa and Cherokee decent. She is an enrolled member of the Kiowa Tribe of Oklahoma. She passed away peacefully... View Obituary & Service Information

The family of Cinda Lynn Hughes created this Life Tributes page to make it easy to share your memories.