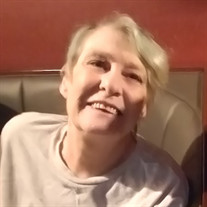 Charlotte Ann (DeWitt) Richardson went to her heavenly home on December 21, 2020 in Anadarko, OK. She was born on June 16, 1962 to Ray and Gaynell Dewitt in Clinton, OK. Charlotte was married to Ken Richardson on October 22, 1987 in Mt. View, OK. She studied horticulture at Caddo-Kiowa Vo-Tech and had a special talent for designing floral arrangements and she enjoyed crafting and diamond dots. Her favorite holiday was Halloween. She enjoyed entertaining and scaring the community with her annual spook walk featuring the Eerie acres actors for over 20 years. They won the best scariest organization float in the 2018 Christmas Parade with their Halloween inspired float "Even Spooks love Christmas". She was awarded woman of the year in 2018 for the year of 2017. Charlotte gave back to her community in many ways, one being here baking of cookies to distribute to local business and city employees on give back Tuesday. She enjoyed spending time at weekend and summers at Chickasha Lake, cate fishing and having fishing contest with her grandson. She enjoyed spending time with her family and friends. One of the brightest day of her life was June 21, 2019 when her granddaughter Carrilynn Charlotte Richardson was born to Calvin and Briston. She was an avid OSU fan much to the chagrin of the rest of her family. She is survived by: Husband, Howard "Ken" Richardson of the home Sons: Keith & wife, April Richardson, Cache, OK and Calvin & wife, Briston Richardson, Anadarko, OK Daughters: Jenny Adams, Anadarko, OK, Rachel & husband, James Pierce, Cache, OK Sisters-in-law: Darlene Walker, Anadarko, OK; Mary Chlouber, Minco, OK; Patsy Baugh & husband, Joe Baugh, Wylie, TX Sister: Sherrie & husband, Rodney Christian, Blanchard, OK 7 Grandchildren, 1 great grandchild and several nieces and nephews, numerous great nieces, and nephews and a multitude of bonus family and friends. She is preceded in death by: Father, Ray Dewitt; daughter-in-law, Vickie Richardson, and grandniece, Kaylee Hamilton. There will be no formal service. A Celebration of life will be held at a later date. In lieu of flowers donations can be made to the Cancer Foundation or Charity of your choice in her name. Under the direction of Ray and Martha's Funeral Home, Anadarko, OK

Charlotte Ann (DeWitt) Richardson went to her heavenly home on December 21, 2020 in Anadarko, OK. She was born on June 16, 1962 to Ray and Gaynell Dewitt in Clinton, OK. Charlotte was married to Ken Richardson on October 22, 1987 in Mt.... View Obituary & Service Information

The family of Charlotte Ann Richardson created this Life Tributes page to make it easy to share your memories.

Charlotte Ann (DeWitt) Richardson went to her heavenly home on...