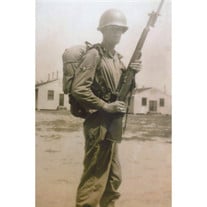 Charles Robert Weeks, 87, of Rocky, Oklahoma passed away on March 11, 2020 at Elk View General Hospital in Hobart, Oklahoma. He was found as an abandoned newborn on March 11, 1933 in Crowder, Oklahoma by who would become his loving adoptive parents, Robert and Oma (Janeway) Weeks. Charles grew up in the McAlester, Oklahoma area and later graduated from high school in Indianola, Oklahoma in 1951. In that same year after graduating, Charles married Betty Jean Best and voluntarily enlisted in the United States Air Force. Their only child, Charles Anthony Weeks was born in 1952 while Charles was in boot camp at Lackland Air Force Base in San Antonio, Texas. He proudly served 20 years during both the Korean and Vietnam Wars. Charles rose to the rank of Technical Sergeant E6 during his military career. He was stationed as a Military Policeman at numerous US bases and overseas bases which included the Philippines, Taiwan, Japan and Germany. Charles retired from the Air Force in 1971. After his military retirement, he owned and operated his own gas station and then went on to work for General Motors for several years. Charles was also a licensed pilot that loved to fly whenever possible. He later divorced from his wife Betty. Time passed and through a mutual friend he met Francis Britton of Sentinel, Oklahoma. He drove his sports car from Midwest City to Sentinel to meet her in person for the first time and it was love at first sight. He decided to bump it up a notch for their second date and rode his motorcycle to town. Charles and Francis married on December 2, 1985. Together they decided to sell off all their belonging and buy an RV and travel to every state in the US and work in various positions at numerous National Parks and also worked as Security Guards for Oil Field owners as they traveled. They later decided to settle down a bit and bought a house in Rocky, Oklahoma in 1997. They continued to travel from home to places like Colorado, Arizona and Texas, always looking for adventures together for as long as they could. They were happily married for 34 years until his death. Charles will be deeply missed by his wife and all that loved him. Survivors include his wife Francis of the home. Grandchildren: Michael Weeks, Dusty Weeks, Carla Weeks, Amanda Weeks, John Weeks and Charles Anthony Weeks II 19 Great Grandchildren 5 Great ~ Great Grandchildren Preceded in death by his Parents and Son: Charles Anthony Weeks I Graveside Service: 2:00 p.m., Saturday, March 14, 2020 Sentinel Cemetery Sentinel, Oklahoma Visitation: 11:00 a.m., ~ 8:00 p.m., Friday, March 13, 2020 Ray & Martha's Funeral Home Sentinel, Oklahoma

Charles Robert Weeks, 87, of Rocky, Oklahoma passed away on March 11, 2020 at Elk View General Hospital in Hobart, Oklahoma. He was found as an abandoned newborn on March 11, 1933 in Crowder, Oklahoma by who would become his loving adoptive... View Obituary & Service Information

The family of Charles Robert Weeks created this Life Tributes page to make it easy to share your memories.

Charles Robert Weeks, 87, of Rocky, Oklahoma passed away on March...