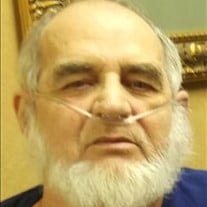 Charles Kelton, 59, of Fort Smith, Arkansas passed away on April 22, 2020. He was born on May 14, 1960 to Billy Charles Kelton & Patricia Liddie May (Turner) Wilhelm in Fort Smith, Arkansas. Charles grew up and attended school in Arkansas. He never married or had any children. Charles lived with and took care of our mom for many years. As a young man, he was involved in an auto accident, breaking his back which placed some limitations on his ability to work. He was gifted with several skills, diesel mechanics abilities, etc. As his health declined, he moved a nursing home, where eventually passed away. Charles will be deeply missed by all who knew and loved him. Survivors include: Brothers: Bill Kelton & wife Marilyn of Clinton, OK Robert Wann of Sallisaw, OK Sisters: Patricia Armstrong & husband David of Muldrow, OK Nancy Ashoori & husband Reza of Cypress, CA He is also survived by several nieces, nephews, great nieces and nephews, and a host of friends. Charles was proceeded in death by his parents, by two sisters, Nancy Gregory and Rose Foster and a niece and her baby. Graveside Service: 11:00 a.m., Monday, April 27, 2020 Akins Cemetery Sallisaw, Oklahoma

The family of Charles Ray Kelton created this Life Tributes page to make it easy to share your memories.

Charles Kelton, 59, of Fort Smith, Arkansas passed away on April...