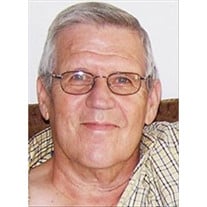 Charles (Charlie) Davis, 76, went home to the Lord Saturday, July 29, 2017, at City of Hope Hospital in Duarte, CA, following a nine-year battle with cancer. Charlie was born February 21, 1941, in Gridley, KS, to Charles "Hugh" and Henrietta (Wolff) Davis, and he was raised in points nearby. He lived most of his life in the idyllic small towns of the mid-west. He worked as a grain cooperative manager and told the best stories about life in rural America.Then his grandbabies started to arrive in California, so he and wife, Mary packed up their home, bought a travel trailer and headed to California in 2000. Charlie lived in Mooreland for a time, beginning in about 1960 when he lived with his sister, Eva Lee Johnson, and husband Cliff. He worked for Cities Service Gas Company near Mooreland until beginning college at Weatherford, where he lettered in track. Charlie and Mary Hurst of Mooreland were united in marriage August 25, 1962, and the family lived several years in the Hobart and Mangum area. He worked for Natural Gas Pipeline Company and farmed near Mangum for five years, then he managed several Farmers Cooperatives. Charlie returned to Mooreland with his family (1977-78), and he worked for Farmers Cooperative Trading Company in Mooreland. They moved to Hobart and lived from 1980-89. Their son, Justin, graduated from Hobart High School in 1989. Known for his wanderlust, Charlie was always planning his next adventure. In retirement, he and Mary shared many adventures... a summer in Alaska, a summer around the Teton and Yellowstone National Parks, a trip to Hawaii, and many other beautiful points around the country. Charlie was an avid sports fan, enjoying high school and college competitions. His favorite occupation in retirement was driving buses for Cal Baptist University sporting teams. He considered it a huge perk to spend time with the athletes and watch them compete. One could always find Charlie cheering on his favorite granddaughter and grandson in their sporting endeavors. He leaves his wife of 55 years, Mary (Hurst) Davis; his son, Justin Davis, and wife, Amy; two grandchildren, Miranda and Sawyer, of Upland, CA. He is also survived by his sisters and brothers-in-law, Eva Lee Johnson and husband, Clifford, of Mooreland and Katherine Arnold and husband, Don, of Hillsboro, KS; one niece, Janice Stanfill, and husband, Bill, of Mooreland, four nephews, Tommy Johnson and wife, ReGina, of Mooreland, Troy Arnold and wife, Kim, of Enid, Todd Arnold and wife, Sandy, of Hillsboro, KS, and Chad Arnold and wife, Melissa, of Hillsboro, KS; in addition to many beloved great and great great nieces and nephews and close friends. Charlie was preceded in death by his parents and daughter, Julie Aleen Davis, in 1983. Funeral service was held in Riverside, CA, Saturday, Aug. 5. Memorial Service: 10:00 am, Saturday, August 12, 2017 First United Methodist Church in Mooreland, OK followed by a reception. Burial will take place in Mangum Sunday, August 13, 2017.

The family of Charles Davis created this Life Tributes page to make it easy to share your memories.