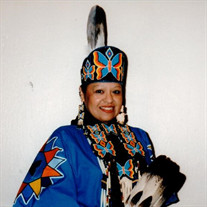 Cassandra Amber (Bointy) Chasenah was born July 12th, 1963 to Warner and Patricia Bointy, Jr in Lawton, Oklahoma. She was the baby girl. She passed away May 15th, 2021 at Comanche Memorial Hospital in Lawton, Oklahoma. She graduated from Bell Gardens High School in Bell Gardens, California in 1981. She was on the drill team and helped start the Title 4 Indian Club that is still active to this day. She was an active pow-wow dancer even as a young lady. She was adopted by Thomas and Ruby Nightwalker and through that relationship she found her love, old style fancy shawl. She was very talented and traveled the United States dancing and competing. Unfortunately, due to shin splints it caused her to give up her passion. This did not stop her from dancing though, she went onto buckskin dancing. She said whether it was fancy shawling or buckskin, she just loved to dance. She was a member of Kiowa Warrior Descendants (where she served as their club princess), Kiowa Tia-Piah Society and Carnegie Victory Club. Out of high school, Cassandra was employed as a intake secretary at the American Indian Free Clinic for three years. She also took up writing poetry and short stories. She was very good at it. She dreamed of going to college and getting a English/Literature degree. When moving back to Oklahoma, she worked at Dicus Supermarket in the floral department until the store shut down. She then took up work at a nursing home as a Certified Nursing Assistant. In 1999, she married Donald Chasenah and they made their home in Cyril, OK. Once in Cyril, she was blessed to be able to stay home where she continued carrying on her love of beadwork. She became very good at her craft and many people came to her for their regalia and is still worn to this day. Although for 6 months, there was a need for a monitor at a youth shelter, which she loved working with the youth. Cassandra and her husband are major OU football fans. She knew all the games stats, player stats and any other little tid-bit there was to know about OU. She was even friends with OU quarterback, Josh Heuple who would always seek her out when he would attend powwows. She was such a fan, her beloved son Pedro, her chihuahua, was decked out in OU dog sweaters and she swore that he would how Boomer. She liked going to hand games, toting her niece, Kandyse, around during her 2004 Kiowa Tribal Princess reign. She had the most fun acting silly with all of her sisters and supporting her nieces and nephews anytime they were head dancing. And her love for music. She would listen to everything and sing on the top of her lungs even at the detriment to her family and friends ears. Proceeded in death by her: maternal grandparents, Fred and Grace LoneBear Tsonetokoy; paternal grandparents, Warner and Mary Satepeahtaw Bointy, Sr. One brother Phillip Bointy. Adopted Cheyenne grandparents Thomas and Ruby Nightwalker. Aunts Linda and Geneva Tsonetokoy, Merlene Venus Haumpy, adopted Cheyenne aunt Phyllis BigLefthand. And her best friends Diana Plumley and Jewel Quinton. Her dogs Pedro and Emma Mae. Survived by her: parents, Warner and Patricia Bointy, Jr, Anadarko, OK. Siblings: Stephanie Bointy, Anadarko, OK; Aurora Bointy, Anadarko, OK and Conrad and wife, Misty Bointy, Anadarko, OK. Adopted sisters: Bobbie MedicineBird, Palmdale, CA; Meliza Lincoln, San Leandro, CA; Erin Plumley-Gibbs, Lumber Bridge, NC Brothers; Jason Lightfoot, Apache, OK and J.R. Ross, Lawton, OK. Numerous aunts, uncles, brothers, sisters, nieces, nephews, grandchildren and 2 great grandchildren. Wake: 6:00 pm- 8:00 pm, Wednesday, May 19, 2021 Ray and Martha's Funeral Home Chapel, Anadarko, OK Graveside: 1:00 pm, Thursday, May 20, 2021 Carnegie Cemetery, Carnegie, OK Visitation: 9:00 am - 6:00 pm, Wednesday, May 19, 2021 Ray and Martha's Funeral Home, Anadarko, OK Under the direction of Ray and Martha's Funeral Home, Anadarko, OK

The family of Cassandra Amber Chasenah created this Life Tributes page to make it easy to share your memories.