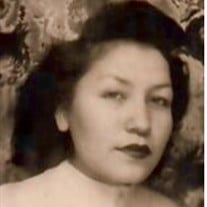 Caroline (Carole) Mobeadlemah Botone Willis was born December 12, 1929 in Carnegie, Oklahoma, and passed from this world on Friday April 23, 2021 surrounded by loved ones at her home in Oklahoma City, Oklahoma, at the age of 92 years and 4 months. Her Kiowa name is Cy�id�b� (Long time-[She]-Go) meaning "Traveled far woman". Carole was a fluent speaker of the Kiowa language and devoted much of her life to Kiowa language preservation. She lost her parents at an early age and was raised by her maternal grandparents John Jerome and Minnie (Topaum) Tapedo who led her in her faith journey. She was a devout Christian and loved worshiping and singing songs that expressed her strong faith. Carole attended Cedar Dale School, Riverside Indian School, and Chilocco Indian Agricultural School, where she graduated in 1949. She married Henry Joseph Willis in El Reno, Oklahoma, and they celebrated 63 years of marriage at the time of his passing. Carole and Henry made their first home in Stratford, OK, and she completed a Bachelor of Arts degree in 1977 from East Central Oklahoma State University with a double major in Psychology and Sociology. Carole began her work in education serving Indian students by establishing Stratford Public Schools' Johnson O'Malley program. In 1978, she began working as a Student Counselor with the Oklahoma City Public Schools (OKCPS) Title IV Indian Education Program, and in 1979, she became the OKCPS Indian Education Program Coordinator. Her program earned national recognition as a Showcase Program. She was also the Oklahoma Council of Indian Education's 1991 Outstanding Indian Educator of the Year. She was delighted to have placed third in the National Indian Education Association's North West Frybread Contest in 1985. After retirement from OKCPS in 1995, she began teaching the Kiowa language with the University of Oklahoma Anthropology Department, where she joined Henry in preserving their respective tribal languages. Carole taught Kiowa using Parker McKenzie's orthography. She was proud of her tribal culture and language and shared her love of learning and teaching Kiowa with countless students and community members. She retired from OU in 2012 after a career of 37 years in Indian education, but she continued to teach and mentor others throughout the remainder of her life. Carole also enjoyed reading, singing, keeping up with current events, watching OU football and OKC Thunder, and treasured the time she shared with her family. Carole was preceded in death by her husband Henry, her grandparents, her parents Phillip and Julia (Tapedo) Botone, two sons Phillip Michael Willis, Carl David Willis, a brother Roland Botone, a sister Indus Joyce Botone, and her uncle and aunt with whom she was raised, Burgess Tapedo and Elva Mae Tapedo. She is survived by a special cousin with whom she was raised, Martin "Pepper" Tsatoke; one son, Victor Timothy Willis & wife Victoria of Cary, NC; four daughters, Julienne Elaine Judd & husband John Sr. of Stratford, OK, Sandra Carole Poolaw & husband Robert Jr. of Norman, OK, Victoria Leigh Willis of Norman, OK; Susan Michelle Estrada & husband Rudy of Oklahoma City, OK; 13 grandchildren; 7 great-grandchildren; 1 great-great-grandchild; and a host of nieces and nephews. Pallbearers will be grandsons John Judd Jr., Dane Poolaw, Jeffrey Poolaw, Elias Poolaw, Tristen Williams, Matthew Estrada, and sons-in-law Robert Poolaw Jr. and Rudy Estrada. Honorary Pallbearers are grandsons Michael Judd, Steven Paul Judd, Travis Williams, Corporal Phillip Estrada, great-grandson Michael Aaron Judd, and Mark Brown. Visitation viewing will be Monday, April 26, 2021 at the Angie Smith Memorial United Methodist Church, 601 S.W. Grand Blvd, Oklahoma City, Oklahoma, from 5:00 pm to 8:00 pm. The Reverends Alvin Deer and Lois Neal will be present. A graveside service will be held at 10:00 AM, Tuesday, April 27, 2021 at the Tanedooah Family Cemetery. Officiating will be the Reverends Alvin Deer and Sharon Yeahquo. The family has asked that mask will be worn and social distancing guidelines will be observed. Under the direction of Ray and Marth's Funeral Home, Carnegie, OK

Caroline (Carole) Mobeadlemah Botone Willis was born December 12, 1929 in Carnegie, Oklahoma, and passed from this world on Friday April 23, 2021 surrounded by loved ones at her home in Oklahoma City, Oklahoma, at the age of 92 years and 4 months.... View Obituary & Service Information

The family of Caroline "Carole" (Botone) Willis created this Life Tributes page to make it easy to share your memories.