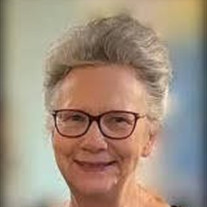 Carol Lynn (Polhemus) Amendt passed from this life, January 15 ,2022 in Hobart, Oklahoma. To all that knew her personally, she went by "Lynn". Lynn was born December 3, 1947, to Ralph and Marian Polhemus in Kingsville, Texas. In her early years, she attended Riviera schools and later acquired a GED. It was in Riviera where she met the love of her life, Edward Amendt Jr., at the age of 15. They were married on June 12, 1963. This union was blessed with 5 children. She was baptized into the General Assembly and Church of the First Born at Oklahoma City, by Brother Frank Rhodes. She began her walk with her Savior, Jesus Christ, on her wedding anniversary, on June 12, 1967. In her early married years, she and Brother Ed moved briefly to the Oklahoma City area, then returned to the Kingsville, Texas area for nearly the entirety of their married life. She was an accomplished homemaker and sewed clothing for her children as well as for herself. During this time of her life, her hobbies were gardening, crocheting beautiful doilies, canning, and playing piano surrounded by her singing children. She enjoyed her siblings and their families. She never wanted anyone to be hungry, and her children remember her sending stacks of egg sandwiches and jugs of water out the door to those who came to her home hungry and hoping for food. In the progression of time, the family relocated to Clarkwood, Texas (west of Corpus Christi). At this time, the church prospered, and Edward and Lynn played an active role in it. Years passed and as Edward's health began to fail, there was the big move to Hobart, Oklahoma. Lynn lived there for more than 20 years amongst family and brethren. Later in life, her hobbies became flowers, fine baking, and working in her yard. She said once, "I never met a flower I didn't like." She had beautiful roses and a host of houseplants that she'd move and have help moving indoors and out as the seasons changed. She owned numerous cookbooks and found pleasure in both cooking out of and reading through them. She enjoyed them with the same relish that another might feel for a good story. She could create incredible desserts. Sis. Lynn was willing to invest lots of time and effort to achieve a remarkable finished product. She was faithful to take food to the sick and those in need. Everyone knew when Sis. Lynn brought food that there would be plenty and some to spare. She was very knowledgeable concerning event presentation � such as hosting baby and wedding showers. She could tell you what needed to be in what bowl or dish. All those that knew her were privy to her fondness of crystal and finer serving pieces. She always strove for a good presentation in everything she put her hand to. She loved her spunky little Yorkie, Phineas. Being a stickler for discipline was a hallmark of her personality, but Phineas broke all the rules and made her smile in the bargain. She LOVED Christmas caroling and all of the church family coming to her house; she would have cookies ready! She was especially fond of attending the annual widow's program, and would stand to thank the brethren afterwards each year. As Sis. Lynn's outward man began to diminish, she experienced a beautiful renewing of the spirit evident to her family and those who helped care for her. It was clear that her inner man was strengthened by God, whom she called her Gracious Redeemer. She was preceded in death by her husband, Ed, her parents Ralph and Marian Polhemus, 4 sisters; Ella Rosser, Ruby Miller, Beulah Polhemus, and Claudine Polhemus, two brothers � Ralph Polhemus, Jr, and Wayne Polhemus; 1 granddaughter Isabella Brown. She was survived by 2 sisters, Pat Jones and Bebe Hargrove, and 1 brother Eddy Polhemus. Also survived by her five children, Richard Amendt, Sheila Amendt, Loura McAbee and husband Kent, Cynthia Brown and husband Brett, Rachel Herrmann and husband Travis; 15 grandchildren, and 9 great grandchildren. Graveside Service: 2:00 p.m., Tuesday, January 18, 2022 Hobart Rose Cemetery Hobart, Oklahoma Under the direction of Ray & Martha's Funeral Home, Hobart, Oklahoma

Carol Lynn (Polhemus) Amendt passed from this life, January 15 ,2022 in Hobart, Oklahoma. To all that knew her personally, she went by "Lynn". Lynn was born December 3, 1947, to Ralph and Marian Polhemus in Kingsville, Texas. In her early years,... View Obituary & Service Information

The family of Carol Lynn Amendt created this Life Tributes page to make it easy to share your memories.