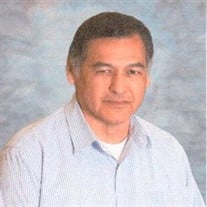 Carmen Dewayne Smith was born on February 16,1956 and passed away May 28, 2021, in Warm Springs, OR. He was a loving brother, father, and grandfather who enjoyed being with his family and friends. He will be deeply missed by all who knew and loved him. He grew up in Anadarko, OK. He attended Carl Albert High School and graduated from Anadarko High School. Carmen acquired a football scholarship to Texas Christian University, Ft. Worth, TX. He then enlisted in the United States Marine Corp. After his tour of duty, he was discharged with honors. He obtained his Associates Degree and worked in law enforcement. Throughout his law enforcement career, he has served with several police departments beginning with the City of Anadarko, OK. As a patrolman, as well as Cyril and Carnegie police departments, The Bureau of Indian Affairs as a patrolman, Lieutenant, Captain, Criminal Investigator, and Supervisory Criminal Investigator, The Warm Springs Tribal Police Department as the Chief Criminal Investigator/Chief of Police; and the Burns Tribal Police department as the Chief of Police and was currently the General Manager of Public Safety for the Confederated Tribes of Warm Springs. He had a total of 36 years in law enforcement. During this time, he received several Commendations in his law enforcement career from The Bureau of Indian Affairs, Federal Bureau of Investigation, U.S. Attorney's office, Confederated Tribes of Warm Springs, Navajo Nation and a Letter of Appreciation from Senator Byron Dorgan, Chairman of the Senate Committee on Indian Affairs. He acquired numerous awards and citations: his leadership skills were second to none. From the mentors and to the men he commanded he will be deeply missed. He acquired the US Marshall badge from the academy of the Federal Bureau of Investigation in Quantico, VA. Carmen was an avid, devoted, and passionate Oklahoma Sooner fan. He also loved the Dallas Cowboys. He is preceded in death by his: parents, Mary Yumnit & Alvin Smith; son, Christopher Smith. He is survived by his: Children: Robert & wife, Anna Smith, Vernon Jackson-Smith, Michael Smith, John & wife, Dawn Fields Sister: Karen Smith-Thompson & husband, Robert Thompson, Gaynell & husband, Contastino Stonecalf Mary Hummingbird-Thompson & husband, David Thompson, Margaret Hummingbird Brother: Eddie Hummingbird Nieces: Delisha Arkeketa, Kacy Smith-Miller, Misty Washington, Stacy Thompson, Blythe Thompson, and Carol Hummingbird-Cardenas Nephews: Tyler Thompson, Montana Stonecalf, Gilbert Tsatoke, D'Ano Hummingbird, Gabriel Hummingbird, Jeremiah Hummingbird, Zachariah Hummingbird and David Thompson, Jr. Including several Grandchildren and great-grandchildren Funeral: 10:00 a.m. Saturday, June 4, 2021 Bethel Baptist Church, Anadarko, OK Interment: 12:00 p.m. Saturday, June 4, 2021 Memory Lane Cemetery, Anadarko, OK Under the direction of Ray and Martha's Funeral Home, Anadarko, OK

Carmen Dewayne Smith was born on February 16,1956 and passed away May 28, 2021, in Warm Springs, OR. He was a loving brother, father, and grandfather who enjoyed being with his family and friends. He will be deeply missed by all who knew and... View Obituary & Service Information

The family of Carmen Dewayne Smith created this Life Tributes page to make it easy to share your memories.