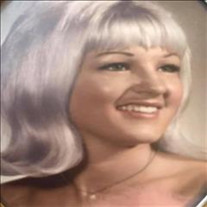 Carla Ann Swanda, 70, was born to Seburn Edward and Melba Doris Smith Worley on August 31, 1950 in Chickasha, Oklahoma, along with her twin sister, Darla. The twins share a special bond and are very close to their sister, Linda, who was a year and a half older. The family lived in Carnegie, Lindsay, and Oklahoma City and then moved back to Carnegie when she was in the 8th grade. Carla fell in love and married Charles Swanda in Carnegie in 1968 and then gave birth to Natalie Rochelle. Carla was a homemaker, a very talented cook and baker, seamstress, and did all kinds of crafts including crochet and macrame. Along with raising her daughter, she also kept her sister, Linda's daughters and ended up having a home daycare for several other "working" moms. She began work at Carnegie Elementary School as a cook in August of 1980, and retired as head cook after 17 years. She and her husband also owned and operated Southwest Raceway for several years in the mid to late 80s where she ran the concession and made the flags for the flagstand. In 1997, she and her husband purchased Swanda's Laundry, which she operated until she became ill. Carla lived a wonderful life serving and giving to others whether it was cooking at home, school, or Falls Creek, hosting many family gatherings, and sewing clothes for she and her daughter, even making her wedding dress. She baked and decorated numerous birthday and wedding cakes for her daughter and nieces and nephew, whom she loved like her own children. Her hot rolls were the family favorite at all of the holiday gatherings. Her family meant everything to her, she loved her husband, daughter and son-in-law, P.K., who could do no wrong. Her grandsons, Chaz and Chason, who affectionately called her "GeeGee" and later "Geeg" were the light of her life. She always said, "There is nothing better than being a grandma." She also loved their wives, Kalley and Isabel, dearly. She is preceded in death by her parents, and grandparents, father and mother-in-law Charley and Clara Swanda, brother-in-law Larry Dyer, her nephew Lloyd Buie and is survived by Her husband Charles Swanda of the home Her daughter and son-in-law, P.K. and Natalie Hurt of Carnegie Her grandsons, Dr. Chaz Hurt and wife Kalley and Officer Chason Hurt and wife Isabel, all of Carnegie Her sisters Linda Dyer of Carnegie and Darla Buie and husband Jim, of Carnegie Her nieces, Anndria Byrd (Terry) of Hinton, Lori Graham (Kirk) of Watonga, Laci Tompkins (Jeff) of Carnegie and numerous great nieces and nephews. Graveside Service: Tuesday, October 20, 2020, 2:00 PM. Carnegie Cemetery, Carnegie, OK Under the direction of Ray & Martha's Funeral Home, Carnegie, OK

Carla Ann Swanda, 70, was born to Seburn Edward and Melba Doris Smith Worley on August 31, 1950 in Chickasha, Oklahoma, along with her twin sister, Darla. The twins share a special bond and are very close to their sister, Linda, who was a year... View Obituary & Service Information

The family of Carla Ann Swanda created this Life Tributes page to make it easy to share your memories.