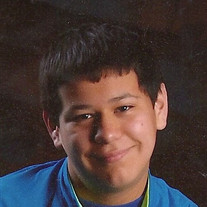 Cameron Brandon Vickery was born on December 8, 1997, at Elkview General Hospital in Hobart, OK to Ron and Stephanie Vickery. He was 16 years, 10 months, 18 days old. Cameron grew up in Hobart and attended Hobart Schools. Throughout Cameron's life, he participated in many activities such as Pee Wee Baseball, Cub Scouts, Band, Jr. High Football, and FFA. Cameron had plans for later in life to join the Air Force and then later be a truck driver and operate construction equipment. He had an outgoing attitude with an infectious dimple smile that translated into many friends throughout his years. He like to golf, draw art, listen to music, watching action movies, and playing with his dog Nina, but most of all, he loved to drive anything with a stick shift and run construction equipment for his Grandpa Vickery. Cameron was mechanically inclined and enjoyed welding and working on anything from bicycles to motors. When something was broke around the house, chances are Cameron would get it fixed by himself using his dad's tools. He would even build contraptions that you would question him on what he was building but he always had a purpose for everything he did. Cameron attended the Church of Christ in Hobart, where he accepted his Lord and savior and was baptized on April 15, 2014. He will be dearly missed by his family and a host of friends to numerous to mention. Cameron is survived by his parents Ron and Stephanie Vickery, Hobart, OK one brother Austin Vickery, Hobart, OK one sister Lori Martinez, Burns Flat, OK Paternal grandparents Arlen and Ann Vickery, Hobart, OK uncles, aunts and cousins. He was preceded in death by his maternal grandparents, uncles, aunts, and cousins. Visitation will be Wednesday, October 29, 2014, 6:30 to 8:30 p.m., at Ray & Martha's Funeral Home, Hobart. Funeral services will be held Thursday, October 30, 2014, at 2:00 p.m., Church of Christ, Hobart, OK Officiating: Bill Coffin Burial will follow in Hobart Rose Cemetery, under the direction of Ray & Martha's Funeral Home, Hobart, OK.

Cameron Brandon Vickery was born on December 8, 1997, at Elkview General Hospital in Hobart, OK to Ron and Stephanie Vickery. He was 16 years, 10 months, 18 days old. Cameron grew up in Hobart and attended Hobart Schools. Throughout Cameron's... View Obituary & Service Information

The family of Cameron Vickery created this Life Tributes page to make it easy to share your memories.

Cameron Brandon Vickery was born on December 8, 1997, at Elkview...