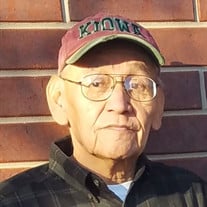 Our beloved patriarch, Calvin, better known as "Buddy Boy", passed away peacefully at home while napping in his chair Sunday, September 13, 2020. He was 71. Buddy Boy was born June 20, 1949 in Lawton, OK to Calvin and Marjorie Mowatt Saumty. Buddy Boy was raised in several states including California, Ohio, Kansas, and Texas before the family made Oklahoma City their home. Calvin began his sophomore year of high school at Classen High School and graduated from there in 1968. He then attended Southwestern State University in Weatherford, OK. Afterwards, he worked in many different capacities eventually finding his calling as a drug and alcohol counselor. While living in Oklahoma City, he and his siblings attended Central Baptist Church where lifelong friendships began and continue through today. In his later years, he became very involved in the powwow circuit where he enjoyed singing at the drum. He joined the Good Medicine Sobriety Society which sponsored many native activities. While a member of this organization, he met his other half, Debbie, who stayed beside him throughout his last days. He then moved to Norman and eventually became involved with the Jacobson House Native Art Center. He loved being a part of his Kiowa culture and sharing with others the knowledge he had gained throughout his life. He learned much from his Kiowa Grandmother, Lucy Saumty, and from his father, Calvin Sr. He and his father were members of the Kiowa Gourd Clan. Calvin also leaves behind four beautiful children; Asa of Azle, TX, Larisa of Austin, TX, Danielle of Colorado Springs, CO and Brenton of Fort Worth, TX. Companion Debbie Kolch of Norman, a loving sister, Bertha Saumty Coates of Edmond, granddaugters Georgianne and Pewo of Azle, TX and Evan of Austin, TX. He will be missed by his cousins, a host of nieces and nephews, great nieces and great nephews, and many special PAHBEES and friends. Calvin was preceded in death by his paternal Grandmother, Lucy Saumty, maternal grandparents, Spencer and Rachel "Ivy" Mowatt, parents, Calvin and Marjorie Saumty, brothers, Ronald Gene and Gerald Wayne "Jerry", sisters Cheryl Elaine "BabyLou", and Charlene Janice "Dody", and nephew Michael Wayne Saumty. The family would like to thank you for the love, respect, and support. Graveside: Friday, September 18, 2020, 1:00 PM Cedar Creek Cemetery Carnegie, OK Under the direction of Ray & Martha's Funeral Home, Carnegie, OK

Our beloved patriarch, Calvin, better known as "Buddy Boy", passed away peacefully at home while napping in his chair Sunday, September 13, 2020. He was 71. Buddy Boy was born June 20, 1949 in Lawton, OK to Calvin and Marjorie Mowatt Saumty.... View Obituary & Service Information

The family of Calvin Saumty, Jr. created this Life Tributes page to make it easy to share your memories.