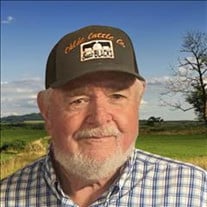 Burdit William McCoy, Jr., known to those who loved him as Burt, was born on October 14, 1947, to Lillian Ruth (Russell) McCoy and Burdit William McCoy in Denison, Texas. Burt died March 1, 2022, during emergency surgery at BSA Hospital in Amarillo, Texas. Burt spent his high school years in San Antonio, TX, and received his education from the Luther Burbank Vocational-Technical High School. His schooling was a mix of traditional high school subjects and agricultural instruction at the school, which was founded on the site of a farm. As a member of the FFA, his school projects included showing steers and registered show hogs. He decided to attend Oklahoma State University when Agriculture instructor Charles Vickery fostered the appreciation for advanced breeding and genetics for the hogs on the school farm. His education in high school and college led to a lifetime of excellence in diversified agriculture. For many years he was a farm operator for N-P Corporation with all his family on the family homestead near Mountain View, Oklahoma. The McCoy cowherd originated in 1901 by Burt's grandfather-in-law; T. P. Parrish. Throughout the years, the pasture acres grew along with the herd's size, and with Burt's skills, the quality advanced. Along with raising the cattle, he diversified the crops and not only farmed wheat but tried his hand at barley, cotton, soybeans, canola, and most recently corn. He also grew alfalfa and native and improved grasses to use for hay to feed the cattle in the winter. Throughout the years he adjusted his farming practices to promote sustainability and land conservation. In addition to farming, in the 1980s he worked with his family at Mountain View Grain. Recently, Burt was so happy that the tiny corn plants were peeking out of the ground and that the baby calves were about to start coming. The cattle will miss his care and he will miss the new spring baby calves and seeing that corn grow tall and strong. Along the way, Burt was an educator, mentor, and guiding force for hundreds of agriculture students, winning at every level of livestock showing. The interest he cultivated in his son Chris led to many awards and achievements in the field, and they spent countless hours together getting livestock ready to show. Under Burt's mentorship, Chris earned a National FFA degree and Southwest Oklahoma Star Farmer. Burt continued supporting vocational instruction by sending daughter Shane to tractor driving school and welding classes during the summers. Though she never showed cattle, daughter Shane helped care for the cattle and helped her Daddy farm. Burt volunteered his precious free time for the good of the greater Mountain View community. He served on the Board of Education during the merger of the Mountain View and Gotebo Schools and ran game clock for hundreds of football and basketball games. As a Sedan Volunteer Fireman and a member of the board, he had the chance to serve and protect his community and cultivated deep and lasting friendships. He also volunteered with Mountain View Ambulance as an EMT and a board member for many years. Early in his farming years, Burt became a life member of the Oklahoma Cattlemen's Association. He was also a life member of the Oklahoma State Alumni Association and worked to provide scholarships for many Kiowa County youth to attend his beloved Oklahoma State. He and his wife Sue were married on December 22, 1967 and recently celebrated 54 years of marriage. Children Shane and Christopher completed their family. His family will miss him dearly. He was preceded in death by his parents Bill and Lil McCoy, parents-in-law Norris and Norine Parrish, nephew Jeff Frishette, niece Kristin McLain, and double aunt Marita Pennycuff. Survivors are wife Sue of the home; daughter Shane and son-in-law Michael Oberle of Austin, Texas; their twin sons Alexander William Oberle of San Antonio Texas, and Samuel Kent Oberle of Philadelphia, Pennsylvania; son, Christopher Ryan McCoy of New Braunfels, Texas; sister Jean and brother-in-law Ralph Merrill of Evergreen, Colorado; niece Lori and husband Jesse True, and their son Jackson of Dillon, Colorado; nephew Winston Merrill, of Austin, Texas; niece Casey and husband Bobby Ninman, and their children Nate and Lily Kate, of Yukon, OK; and niece Jennifer and husband Erik Terry and their children Parrish and Eli of Tuttle, OK; and many beloved friends from all over the area. With a sense of humor and an all-encompassing work ethic, he was well known for his leadership and connection to friends and will be sorely missed. In lieu of flowers, the family suggests a memorial gift in Burt's name to the Sedan Fire Department, the Mountain View Masonic Lodge, a scholarship through Mountain View-Gotebo Schools for a deserving student enrolling in Oklahoma State University, the Mountain View United Methodist Church, or a worthy cause of your choice. Graveside Service: 4:00 p.m., Sunday, March 6, 2022 Mountain View Cemetery Mountain View, Oklahoma Visitation: Family will be welcoming guests 2:00 p.m.-4:00 p.m., Sunday, March 6, 2022 Ray & Martha's Funeral Home, Mountain View

Burdit William McCoy, Jr., known to those who loved him as Burt, was born on October 14, 1947, to Lillian Ruth (Russell) McCoy and Burdit William McCoy in Denison, Texas. Burt died March 1, 2022, during emergency surgery at BSA Hospital in... View Obituary & Service Information

The family of Burdit William McCoy, Jr. created this Life Tributes page to make it easy to share your memories.

Burdit William McCoy, Jr., known to those who loved him as Burt,...