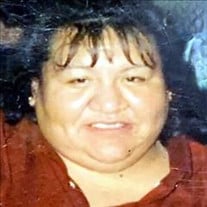 Bridgette Lynn Satepeahtaw was born on April 7, 1960 in Okmulgee, OK to LaVern and Marie Satepeahtaw and was called to her heavenly home on August 7, 2021 after a brief illness. Bridgette is a full-blood member of the Kiowa Tribe of Oklahoma. Although she was a life-long resident of Carnegie, she did venture outside of the area after graduating from Carnegie High School in 1978 when she went to continue her education at Southwestern Oklahoma State University in Weatherford, OK and Rose State College in Midwest City, OK. She was later employed by the Kiowa Tribe of Oklahoma for nineteen years, serving in several different capacities that ended with her being the Director of Procurement until leaving her employment in May of 2017. Bridgette was an excellent crafter. She could sew, bead, bake, design, and could even do carpentry. Her greatest satisfaction was doing projects for her family, which she would carry out in record time. She also enjoyed reading Harlequin romance novels, collecting movies, and babysitting her numerous nieces and nephews. Bridgette moved to Dallas, TX for a short period of time from 1989 to 1991, and it is there that she met Richard Smith. This union blessed her with her only child, Hypatia Danica Smith, which later followed with the addition of grandchildren. Survivors include: Daughter: Hypatia Danica Smith Brothers: Martin "Pepper" Tsatoke, Malcolm Tallbird, LaVern Jr., Leon, Lyndrith, Cornel, Billy Cozad, Chebonnie LeClair Sisters: Donna Sebedra, LaDonna Kim, Carol, Amy, Sandra, Marisa, Velma Grandsons: Ricky, Daniel, Calvin, Kawhi Granddaughters: Lynica, Nykylie, Ashlynn, Makyla Special Nieces: Racey Lynn, Codie Rae, Bella Special Nephews: Cody, Bian, Jon Dee Numerous other family and friends. Bridgette held all of her nieces/nephews and their children dear to her heart and loved each and every one of them with all that was in her. Preceded in death by her parents: LaVern and Marie Satepeahtaw; brothers: Frederick "Choo Choo" Satepeahtaw, Vernon "Howie" Toyekoyah, Ronald "Dawes" Twohatchet; nephews: Bryan Dale Satepeahtaw, George Tallbird; aunt/uncle: Curtis and Penelope Horse; paternal grandparents; maternal grandparents. Visitation: 9:00AM - 8:00PM Tuesday, August 10, 2021 Ray and Martha's Funeral Home Carnegie, OK Graveside Services: 11:00AM, Wednesday, August 11, 2021 Rainy Mountain Tribal Cemetery Mountain View, OK Under the direction of Ray and Martha's Funeral Home, Carnegie, OK.

Bridgette Lynn Satepeahtaw was born on April 7, 1960 in Okmulgee, OK to LaVern and Marie Satepeahtaw and was called to her heavenly home on August 7, 2021 after a brief illness. Bridgette is a full-blood member of the Kiowa Tribe of Oklahoma.... View Obituary & Service Information

The family of Bridgette Lynn Satepeahtaw created this Life Tributes page to make it easy to share your memories.

Bridgette Lynn Satepeahtaw was born on April 7, 1960 in Okmulgee,...