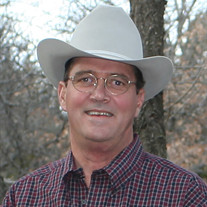 Bradley Keith Davis, age 62, known by many as "Colorado Kid" and "Papa Bread" by his grandchildren, passed away on September 25, 2018 on the Reid Ranch, nestled in the heart of the Wichita mountains west of Roosevelt, Ok. Brad was born September 20th, 1956 to Nelson and Olene Reid Davis at Altus, OK. Growing up in the country, he was always in the mountains hunting and fishing. He graduated from Roosevelt High School in 1974. Somewhere around the age of 5, he laid eyes on the love of his life, Mallory Buchanan. As high school sweethearts they began a wonderful lasting bond of friendship and marriage of 42 years. When Brad wasn't hunting or fishing he farmed and ranched. He was the ultimate supervisor on how to fix things. He enjoyed going to cattle sales and in later years looked forward to lunch with friends and family at Bedlam Bar and Grill in Hobart. His childhood role model, grandfather Olan Reid, instilled in him the passion of sports, especially baseball, the respect of the land and livestock, and the love of the outdoors. One of Brad's main goals in life was passing these same traits onto his children, daughter Dierra Michelle Heglin, sons Chanan Reid and Bryson Walt , and two grandchildren Addie Sommers & Thatcher Clinton Heglin, and his favorite son-in-law Trapper Heglin. Great enjoyments of his life were Mallory's cooking, his children, coaching little league, fishing/hunting, arrowhead hunting, walking his daughter down the aisle, his beloved grandbabies, and spending time with friends and family. Brad was a member of the Roosevelt Church of Christ. Brad is preceded in death by mother Olene and survived by wife Mallory, his children and grandchildren, father Nelson Davis, sister Suzanne and husband Keith Bonham, brother Reid Davis and wife Cherrel, in-laws Chester and Barbara Buchanan, and many nieces and nephews. He will be laid to rest in a handmade casket at Green Valley cemetery. Funeral: 10:00 a.m., Saturday, September 29, 2018 First Baptist Church Roosevelt, Oklahoma Interment: Green Valley Cemetery Mountain View, Oklahoma Services are under the direction of Ray & Martha's Funeral Home, Hobart, Oklahoma. A picnic will be held at the Saddle Mountain Picnic Grounds following Brad's services.

Bradley Keith Davis, age 62, known by many as "Colorado Kid" and "Papa Bread" by his grandchildren, passed away on September 25, 2018 on the Reid Ranch, nestled in the heart of the Wichita mountains west of Roosevelt, Ok. Brad was born September... View Obituary & Service Information

The family of Bradley Keith Davis created this Life Tributes page to make it easy to share your memories.

Bradley Keith Davis, age 62, known by many as &quot;Colorado Kid&quot;...