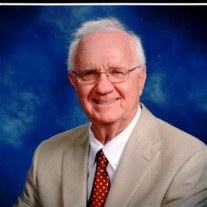 Bobby E. Tompkins (Bob) was born on November 12, 1936 to William Henry Tompkins and Martha Irene Tompkins (Bentley) in Randlett, Oklahoma. He spent most of his childhood and early adult years in Oklahoma City. After working his way through college and graduating from Oklahoma City University with a Business/Marketing degree, he moved to Amarillo, Texas. His career would take him back to Oklahoma, to Kansas, to Nebraska, back to Oklahoma, to New Mexico and back to Oklahoma. While he had a tremendous work ethic, his definition of success was not rooted in what he did to earn a living. His measures of success, and his passion, revolved around God and his family (and, maybe Oklahoma Sooners Football). Bob married Sue Tompkins (Parks) on June 1, 1961. They were married for almost 60 years and in their home one could always find some reference to the verse they claimed and lived by (Isaiah 40:31). Together they had four children. No matter what new town life took them to, they immediately sought a new church home where they could work and serve the Lord. Bob worked faithfully in each church and often served as a Deacon and/or as an adult Sunday school teacher. Bob said recently "I gave all four of my kids a drug problem, I drug them to church." And he did. As a result, each of his children have a strong faith rooted in Jesus Christ. Bob was a fully engaged father, rarely missing any event in his children's lives. As children (and as adults) he was always their "go-to" for advice. He prayed for them daily, celebrated their successes, and stood by them when they walked in valleys. Always loving, teaching, encouraging and supporting. Preceding Bob in death are his parents, his sister (Billie Sue), his sister-in-law (Jane Wisniewski) and his son Robert Scott Tompkins (who we are sure met him at Heaven's gate and introduced him to Jesus). He is survived by his wife Sue Tompkins (Anadarko, OK), his sister-in-law and brother-in-law Billie Jo and JD Hadley (Edmond, OK), his sister-in-law Daisy Gibson (Edmond, OK), his daughter and son-in-law Bob and Mitzi Vavrick (Lake in the Hills, IL), his daughter and son-in-law Chris and Nancy Allen (Gracemont, OK), his son and daughter-in-law Steve and Julie Tompkins (Killeen, TX), and seven grandchildren. Isaiah 40:31 "But they that wait upon the Lord shall renew their strength; they shall mount up with wings as eagles; they shall run, and not be weary; and they shall walk, and not faint." Respecting COVID-19 Guidelines, graveside services will be private. In lieu of flowers, please consider donations to a Parkinson's Disease charity, a charity of your choice or to the First Baptist Church of Anadarko. Private Family Graveside Service: 11:30am Wednesday, December 2, 2020 Memory Lane Cemetery, Anadarko Visitation: 12:00 pm - 8:00 pm, Tuesday, December 1, 2020 Ray and Martha's Funeral Home, Anadarko, OK Under the direction of Ray and Martha's Funeral Home, Anadarko, OK Under the direction of Ray and Martha's Funeral Home, Anadarko, OK

Bobby E. Tompkins (Bob) was born on November 12, 1936 to William Henry Tompkins and Martha Irene Tompkins (Bentley) in Randlett, Oklahoma. He spent most of his childhood and early adult years in Oklahoma City. After working his way through college... View Obituary & Service Information

The family of Bobby Edd Tompkins created this Life Tributes page to make it easy to share your memories.