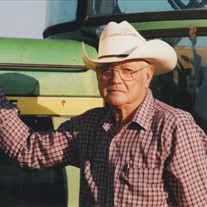 Billy Wayne Phillips was born on October 10, 1934 to Leslie "Les" and Tennie Phillips at home southwest of Colony, Oklahoma and passed away on November 26, 2020 in Carnegie, Oklahoma. At a young age Billy and his family moved to Lake Valley, not far from Gotebo. Billy attended school there and graduated in 1953. He farmed with his dad a while and did some auctioneering in Hobart before deciding to attend Southwestern Oklahoma State University. Billy graduated from college in 1960, earning a Bachelor of Science in Education and continued until he earned a Masters in Teaching. In 1960, Billy accepted a job in Carnegie as a counselor and coach while also farming on the weekends, school holiday breaks, and summers. Billy met Marietta Sullavan, a fellow teacher at Carnegie, and they were married in 1962, with Billy gaining a son, Greg Sullavan. In 1980, Billy welcomed a granddaughter, Briana, who he and Marietta raised like a daughter. Billy taught his entire career in the Carnegie school and retired in 1998. If you asked Billy how he liked working at school, he'd say, "I loved every minute of it." He really enjoyed the kids and his co-workers and was always happy to be at school. After retirement, he was able to devote all his time to farming and raising cattle, another part of his life he thoroughly enjoyed. You might say the farm was a deep part of Billy's identity and even after he was too old to work out there, he and Marietta drove by checking on things all the time, just so he could enjoy looking at it. Billy was a good natured man, never met a stranger, loved to take the time to visit with anyone, and never had an enemy. Preceeding Billy in death was his wife, Marietta, his son Greg Sullavan, his parents Leslie and Tennie Phillips, grandparents Mack and Lona (May) Phillips and John and Mary Lou (Owens) Jaynes. Survivors are granddaughter Briana Johnson and husband Adam and their three children Zane, Ava, and Lily, and grandson Russ Sullavan. Graveside Service: 4:00pm Friday, November 27, 2020 Lawnview Cemetery, Cordell, OK Under the direction of Ray and Martha's Funeral Home, Carnegie

Billy Wayne Phillips was born on October 10, 1934 to Leslie "Les" and Tennie Phillips at home southwest of Colony, Oklahoma and passed away on November 26, 2020 in Carnegie, Oklahoma. At a young age Billy and his family moved to Lake Valley,... View Obituary & Service Information

The family of Billy Wayne Phillips created this Life Tributes page to make it easy to share your memories.