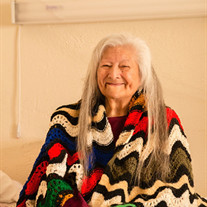 Billie Ruth Hoff was born on February 9th, 1927, in New York City, the oldest daughter of noted Caddo artist and actor, Michael James Martin "Chief Silvermoon" and Ruth Youngblood. Mike and Ruth had two younger daughters, Colleen and Geraldine. Billie always laughed and said she was her dad's favorite. Later, her father married Wynema Southerland, whom Billie loved very much, as she did all her younger siblings. Billie was very much attached to her father and traveled with him as he performed with a Vaudeville group as a singer and actor. She was honored to go to England with him, and never forgot that adventure. She attended several schools, and moved to North Dakota, where she received her degree in Nursing. After moving to Arkansas, she operated a Health & Nutrition business. She married the love of her life, George Hoff, and they made their home in Oklahoma City, where she loved having visits from her family, especially her younger family members. She was active in Caddo Tribal Affairs, and once served as an Oklahoma City Representative. She was intrumental in starting the Oklahoma City Indian Clinic. She inherited her father's artistic talent, and painted many beautiful works of art, which she signed as "Silvermoon II." She designed the Caddo Seal, which is used on the Caddo Flag and car tags. She was recently honored at an AARP event at the Cowboy Hall of Fame in Oklahoma City. Billie Ruth loved to laugh, and her deep dimples only served to highlight her beauty. She could be stubborn and ornery as well, but even then was charming. She loved to sing as well. Billie loved sweet things: ice cream, scones, cinnamon buns and her favorite, coconut cake. They all made her happy. After moving to the Binger Nursing Home, she loved having her hair braided by Penny Howe, and visits from her special friends, including her "Cowboy from Montana." Her long artists fingers always featured pretty painted fingernails and she loved choosing the color. She was the best "hand-holder" ever. Billie Ruth made many contributions to her culture and to those who were privileged to be around her. She passed away peacefully, Sunday morning, August 12th, 2018 at Integris Canadian Valley Hospital in Yukon after a brief illness. She was preceded in death by her husband, George; her adopted son, Jon; her sisters and brothers, Colleen Martin Moss, Geri Martin, LaRue Martin Parker, LaJauina Martin Lewis, Michael Martin, Thomas Martin, and Rollo Bowers; and her parents, Mike Martin, Ruth Youngblood, and Wynema Martin. She is survived by her siblings, Cleo Martin Barnes, Tressia Martin Bond, Darlene Martin, Lynette Martin, and Phillip Martin; as well as other relatives and friends. Funeral Services will be 1:00 p.m. Thursday, August 16, 2018 at the Caddo Community Complex East of Binger, Oklahoma. Interment will follow at the Fairlawn Cemetery in Comanche, Oklahoma. Her services are under the direction of Ray & Martha's Funeral Home of Anadarko, Oklahoma.

The family of Billie Ruth Hoff created this Life Tributes page to make it easy to share your memories.