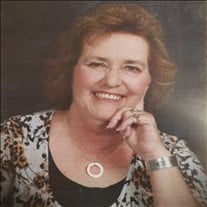 Beverly L. Whitworth, was born on April 14, 1950 in Carnegie, Oklahoma to George "Junior" Adkins and Lottie P. Swanda. She graduated with pride from Carnegie High School in 1968 and continued to stay in touch with her classmates thereafter, always looking forward to Alumni events. She furthered her education at Southwestern University, where she graduated with a Bachelors degree in Accounting. She was self-employed as an accountant / tax preparer in Carnegie, OK for many years. She had two Children, Scott and Susan, who she loved dearly. She could always be spotted cheering them on at various sporting and FFA events. Beverly married the love of her life, Edward Whitworth in Las Vegas on July 26, 1992. She was always a hard worker, and after the couple purchased their farm, her favorite things to do were working the cattle, most all of which she had personally named, and driving the tractor. She also proved to be an excellent campaign manager when she began helping Edward with his elections. The pair enjoyed traveling and ended up making many trips around the country together. She took delight in gaming as well, whether it be playing slot machines, games on the PC, or spending hours dominating the family at Farkle, Dominoes, Canasta, and many more. Beverly was a master in the kitchen, and adored cooking for family and friends. Her fudge was legendary. She was the world's greatest Nana to 5 grandchildren, all of whom she loved taking care of and spending time with in any way she could. Beverly was a member of the First Baptist Church in Carnegie. Beverly passed away on Thursday, March 17th, 2022. She is survived by her husband Edward Whitworth Children: Scott Adkins, Edmond, OK; Susan Abbott Clark, Carnegie, OK; Daniel Whitworth, Ochelata, OK Grandchildren: Scotty Adkins; Serenity Clark; Jesse Montgomery; and Noah Whitworth Sister: Judy Adkins Holsted Special Family Member: Erica Bointy and her son, Erick She is preceded in death by her Grandson: Seth, Parents: Junior and Lottie Adkins, and Sister: Linda Carlile Funeral Services are Tuesday, March 19, 2022 at 2:00 P.M. at the First Baptist Church, Carnegie, OK. Internment Carnegie Cemetery, Carnegie, OK Services For : Beverly Whitworth Funeral Service: 2:00 p.m., Tuesday, March 22, 2022 First Baptist Church, Carnegie, OK Interment: 3:00 p.m., Tuesday, March 22, 2022 Carnegie Cemetery, Carnegie, OK Visitation Date: 1:00 p.m. - 8:00 p.m., Sunday, March 20, 2022 9:00 a.m. - 8:00 p.m., Monday, March 21, 2022 Ray & Martha's Funeral Home, Carnegie, OK Under the direction of Ray & Martha's Funeral Home, Carnegie, OK

Beverly L. Whitworth, was born on April 14, 1950 in Carnegie, Oklahoma to George "Junior" Adkins and Lottie P. Swanda. She graduated with pride from Carnegie High School in 1968 and continued to stay in touch with her classmates thereafter,... View Obituary & Service Information

The family of Beverly L. Whitworth created this Life Tributes page to make it easy to share your memories.