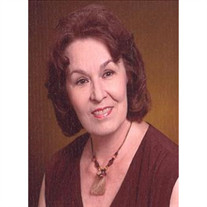 Betty Gae Sappington Born July 1, 1939 to Joel Martin Hughes & Willie Mae (Howard) Hughes in Tipton, OK., Betty was the middle daughter of three girls. She grew up on a farm near Davidson, OK, in a very strong Christian home and farming community. During her school years she was active in sports, played the piano, and in the summers also helped in the fields of the family farm. She attended Southwestern University in Weatherford, OK where she joined the BSU. There she met William Earl (Bill) Sappington and the two married June 13, 1959. Shortly thereafter they had their first and only child Lisa, and moved to Edmond, OK in 1960. They first attended First Baptist Church, but later helped form a charter church, Henderson Hills Baptist Church. Lifetime members, Betty served as church pianist from inception in 1965 til 1980; Bill serving as a deacon and a member of every committee, always raising funds and building on to an ever-growing church. Betty's professional career started In 1960, working for the State of OK in the General Land Office. She started as Sr. Stenographer, and through the next 20-plus years of service would retire and leave as an assistant director. Betty attained a Bachelor's degree in Business from Central State University while working in the Land Office, later going to work for Tinker Air Force Base. She served in contracting and purchased parts for aircraft for many years, and studied and attained her Master's degree during this time. Later Betty was assigned in Food Services at Tinker and was placed in charge of running the three separate dining facilities feeding on- and off-base personnel. She was most noted there for her planning and overseeing of the holiday menus for those who had to stay and serve, unable to travel home to family, to make sure they had a letter of appreciation and a delicious holiday meal. After 20-plus years at Tinker Air Force Base as well, Betty again retired. Approx three years later in 2003, Betty moved to Georgetown, Texas to be close to her daughter Lisa and Son-in-Law David "Dave" Preister. She built a home and began serving as a volunteer at the Georgetown Hospital, working in the Gift Shop where she served for 13 years. She served her neighborhood HOA as well, again planning holiday menus for the Christmas parties. She attended Crestview Baptist Church in Georgetown and was in the ladies Bible study group there for many years. In August of 2017 she was diagnosed with cancer. After a hard fought battle, she eventually succumb to her illness. Betty is survived by her daughter Lisa Preister (David Preister), her sister Ellen Hulsey (Alfred Hulsey), and her sister Lynda Gilpin; Brother-in-Law Wayne Clyma and an Aunt, Bess Hughes. Nephews Mark Hulsey (Rebecca), Tobin Gilpin (Kim), Tod Gilpin (Kristen), Gary Clyma, Howard Clyma (Christy), Steve Sappington (Anna), and Niece, Ann Sappington, as well as many great nephews and nieces. She is preceded in death by her Father, Joel Hughes, her Mother, Willie Mae Hughes, and husband William Earl (Bill) Sappington. Funeral Service: 11:00 a.m., Friday, August 31, 2018 Trinity Baptist Church Mangum, Oklahoma Interment: Brinkman Cemetery Mangum, Oklahoma

The family of Betty Gae Sappington created this Life Tributes page to make it easy to share your memories.