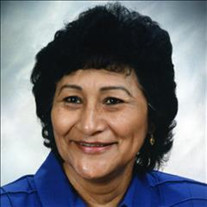 Bessie Ramirez, 79, was born on March 17, 1941 at Kiowa Indian Hospital in Lawton, Oklahoma to Jacob Sherwood Tsotigh and Josephine (Kodaseet) Tsotigh. Bessie passed away on Monday, December 7, 2020 at Corn Heritage Nursing Home in Corn, Oklahoma. Bessie was raised in and around Carnegie, Oklahoma by Johnson and Fannie Tsotigh Smith. She attended Carnegie Public Schools, later attending trade school to learn clerical duties. Bessie married the love of her life, Apolinar Ramirez, on April 26, 1968. They settled into a home that they would share for many years in the town of Verden, Oklahoma. Bessie worked as a teacher's assistant at Verden Public Schools, eventually opening up her own in-home daycare. Bessie had a love for children and had her hand at helping many parents raise their kids. She treated each and every one of them as if they were her own. Bessie and her husband eventually moved back to Carnegie to be close to Kristi and her family. Bessie loved painting, gardening, and baking. She enjoyed spending her free time going to pow-wow's, crafting, and decorating cakes. If she wasn't busy in the house, you could find her spending time with her daughter, Kristi, and her beloved grandkids. She was the best grandma that any kid could ask for, as she often spoiled them to no end. She loved watching her grandson and granddaughter play sports. Bessie was very active as an officer and member of the American War Mothers - Kiowa Chapter 18 for many years. She was very proud of her son and daughter's service in the US Navy. Bessie was always up to going and doing just about anything � her smile and personality were just a few of the things her family will miss the most about her. She will be greatly missed by so many family members and friends. Bessie is survived by two daughters, Kristi Longhat and her husband, Michael of Carnegie, Oklahoma; Jo Kathy Jordan of Arkansas; two sons, Michael Satepauhoodle and his wife, Wanona of Chickasha, Oklahoma, Wayne Satepauhoodle of Chickasha, Oklahoma, Tonya Carnes of Duncan, Oklahoma; eleven grandchildren, Bryson and Kinley Longhat of Carnegie, Oklahoma, Damien Satepauhoodle of Duncan, Oklahoma, Ryan Satepauhoodle and his wife, Meagan of Odessa, Texas, Anna Satepauhoodle of Lawton, Oklahoma, Darlene Satepauhoodle of Lawton, Oklahoma, Nicole Satepauhoodle of Chickasha, Oklahoma, Mike Satepauhoodle Jr. of Anadarko, Oklahoma, Hattie Holcomb and her husband, Thomas of Paragould, Arkansas, Shawnda Ethridge of Paragould, Arkansas, David B. Ethridge of Fort Meade, Maryland; twenty-one great-grandchildren; one great-great-grandchild. Bessie is preceded in death by her husband, Apolinar Ramirez; son, Paul Edward Ramirez; her parents; one great-grandchild; several other beloved family members. Graveside services for Bessie Ramirez will be on Friday, December 11, 2020 at 1:00pm at Carnegie Cemetery in Cemetery, Oklahoma. Officiating will be Marilyn Bread. Under the direction of Ray and Martha's Funeral Home in Carnegie, Oklahoma.

The family of Bessie Catherine Ramirez created this Life Tributes page to make it easy to share your memories.