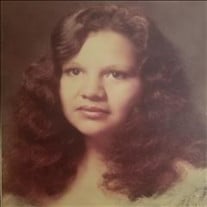 Aurora Mae Bointy was born February 1, 1961, to Warner and Patricia Bointy, Jr in Lawton, OK. She passed away July 28, 2021, at Physician's Hospital in Anadarko, OK. She attended Bell Gardens High School in Bell Gardens, CA. She was on the pep commission, student council and concurrently attended Vo-Tech for Certified Nursing Assistant even though she was too young for the program. Through those connections she was able to apply and get accepted into the nursing program at the University of Southern California in which was one of the hardest nursing program in the country to be accepted. She earned her bachelor's degree and later her masters. She was trained in the old-style nursing with white head to toe everyday which is why she disliked wearing white later in life. She taught nursing and worked at one of the busiest emergency rooms in Los Angeles, CA. All the while raising her son, Ronald, on her own. Later after retiring from nursing, she started working for the Southern California Indian Center. She worked as a receptionist and then worked her way up the ladder. She helped establish the Tobacco Control Education Program. She helped reservation kids get medical help for reconstructive surgeries due to mouth cancer. She was also one of the people who helped kill "Joe Camel." She was also a rockstar grant proposal writer. Totaling hundreds of million dollars for various organizations and causes. And in all that time she managed to have her daughter Bree which she toted her around to meetings and taught her early on how to command presence in a room full of people and to make your point. She was also a lobbyist for the Republican party which she loved. Then in 1995 her and Bree moved to Ada, OK to be back with her parents. She went back into nursing and specialized in Geriatrics. Her momma always asked her how she had patience with the elderly when she didn't have patience with anyone else and she said that they were just cute. In 2002 she started working with Main Street in Pauls Valley, OK and helped write grants for the revitalization of historic main street buildings. After her daughter graduated, she retired from working and concentrated on her family. She loved beading and sewing. She had lost count of how many sets of beadworks she has done, but the last count was around 250. She loved putting her sister Cassandra in elaborate dresses and seeing what she would actually wear. In 2005, she moved in with her daughter and son-in-law and was just enjoying life and attending Pow-wows. She was Princess for Kiowa Warrior Descendants as well as a member, a member of Carnegie Victory club, a member and recently the secretary of the Kiowa Tia-Piah Society, and a member and secretary of the American War Mothers Kiowa Chapter 18. There wasn't a club or organization that she didn't try to help either by donating beadwork or selling raffle tickets. She loved her family, her many near and dear extended family and her grandbabies. Preceded in death by her: maternal grandparents, Fred and Grace LoneBear Tsonetokoy; paternal grandparents, Warner and Mary Satepeahtaw Bointy Sr.; one brother, Phillip Bointy; one sister Cassandra Bointy; adopted Cheyenne grandparents, Thomas and Ruby Nightwalker; Navajo mom, Gene Begay; Otoe mother and father, Richard and Celeste Roubedeaux; Kickapoo mom and dad, Art and Betty Ketcheshawno; Aunts, Linda Tsonetokoy, Geneva Walker; Cheyenne Aunt, Phyllis Big LeftHand; one grandson, Antonio Sieple; great grandson, Bronson Dale Gilmore; adopted sister, Denise Sovo; brothers, Hokeah Bointy and Robert Wells She is survived by her: parents, Warner and Patricia Bointy, Jr, Anadarko, OK Son: Ronald Ross Bointy and companion, Stephanie, Lawton, OK Daughter: Bree and husband, Michael Watkins, Anadarko, OK Siblings: Stephanie Bointy, Anadarko, OK and Conrad and wife, Misty Bointy, Anadarko, OK Adopted sisters: Patty and husband, Ray Gandner, Tustin, CA; Bobbie MedicineBird Palmdale, CA; Etta and Nancy Roubedeaux, Red Rock, OK; Meliza Lincoln, San Leandro, CA; Vickie Franco, Youngsville, LA; Shirley Wells, Anadarko, OK; Dorothy Tahah, Elgin, OK Special brothers: Leonard Cozad, Jr; Jason Lightfoot and Jr Ross; Charles Cozad Adopted Children: Sean Wells, Samantha Wells, Vicki and Brian Lipscomb; Naomi and Ismal Williams; Natasha and Kenny Kairu; Talon and Shanesta Hillebrand Granddaughters: Amber McLemore Bointy, Addison and Lula Watkins Numerous aunts, uncles, brothers, sister, nieces, nephews, grandchildren and 2 Great Grand children Wake: 6:00 pm - 8:00 pm, Sunday, August 1, 2021 Ray and Martha's Funeral Home Chapel, Anadarko, OK Graveside: 2:00 p.m., Monday, August 2, 2021 Cedar Creek Cemetery, Carnegie, OK Visiting Hours: 3:00 PM - 8:00 PM, Saturday, July 31, 2021 1:00 PM - 6:00 PM, Sunday, August 1, 2021 9:00 AM - 12:00 PM, Monday, August 2, 2021 Ray and Martha's Funeral Home, Anadarko, OK Under the direction of Ray and Martha's Funeral Home, Anadarko, OK

Aurora Mae Bointy was born February 1, 1961, to Warner and Patricia Bointy, Jr in Lawton, OK. She passed away July 28, 2021, at Physician's Hospital in Anadarko, OK. She attended Bell Gardens High School in Bell Gardens, CA. She was on the... View Obituary & Service Information

The family of Aurora Mae Bointy created this Life Tributes page to make it easy to share your memories.

Aurora Mae Bointy was born February 1, 1961, to Warner and Patricia...