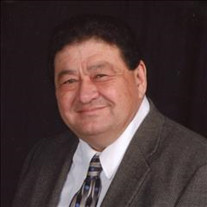 Arthur Charles Blount went home to his Lord and Savior on November 8, 2020, at the age of 65. He was born on February 15, 1955 in Misawa Japan to Charles and Shizue Blount. Due to his father's military career, his family lived in Japan, Germany, and Texas before settling in Lawton, Oklahoma where he graduated from Eisenhower HS in 1973. There he met the love of his life, Jonita Garrett. The two were married in 1976. Arthur graduated from Cameron University with a B.A. in Music Educaton in 1977. Shortly after, they were called to the First Baptist Church in Carnegie, Oklahoma where Arthur served as the Youth and Music Director for 13 years before becoming the pastor in 1990, where he served until his death. Arthur and Jonita had four children - Charlie, Justin, Jared, and Melanie. They were a great source of laughter, joy, pride, and love in his life. He devoted his life to serving others and studying the Bible. In 1999, he earned a Doctorate in Theology followed soon after by a Doctorate in Ministry. Arthur genuinely loved and cared for people. His role as pastor at First Baptist Church in Carnegie was simply an outpouring of his love for Christ and people as he cared for members and non-members alike as family. He will forever be remembered by all for his ability to recall scripture and share wisdom. One quote he is most known for was "spread love, spread love." Many will remember his ping pong skills, love for professional wrestling, quick wit, and smile. He was an outstanding vocalist and accomplished musician, playing multiple instruments, most notably piano and guitar. He is preceded in death by his parents, Charles and Shizue Blount. He is survived by: his wife Jonita, of the home. His siblings: a Sister, Susie Rinderle and husband Don, Lawton, Oklahoma; Brother, Chester Blount and wife Sheila of Lawton, Oklahoma His children: Rev. Charlie and Renee Blount of Moore, OK Prof. Justin and Atalie Blount of Nacogdoches, TX Rev. Jared and Emilie Blount of Oklahoma City, OK Melanie and husband Rev. Ty Graham of Pawnee, OK His sixteen grandchildren: Avery, Ethan, Evan, and Adalyn Blount of Moore, OK; Amelia and Oliver Blount of Nacogdoches, TX; Jacen, Anna, Bennett, Emma Leigh and baby Blount of Oklahoma City, OK; and Deacon, Eva, Elise, Iris and Gibson Graham of Pawnee, OK And a host of friends. In lieu of flowers the family request donations to First Baptist Church, Carnegie, OK or Gideon International. Funeral Service: Thursday, November 12, 2020, 2:00 PM First Baptist Church Carnegie, OK Viewing: Wednesday, November 11, 2020 9:00am - 8:00 pm Ray & Martha's Funeral Home, Carnegie, OK Interment: Private family interment, Thursday, November 12, 2020 3:00 PM Carnegie Cemetery, Carnegie, OK Under the direction of Ray & Martha's Funeral Home, Carnegie, OK

Arthur Charles Blount went home to his Lord and Savior on November 8, 2020, at the age of 65. He was born on February 15, 1955 in Misawa Japan to Charles and Shizue Blount. Due to his father's military career, his family lived in Japan, Germany,... View Obituary & Service Information

The family of Arthur Charles Blount created this Life Tributes page to make it easy to share your memories.

Arthur Charles Blount went home to his Lord and Savior on November...