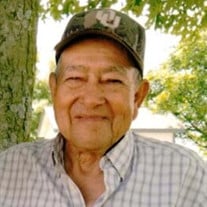 Apolinar (Polo) Ramirez Apolinar Ramirez was born December 29, 1937 at his family home near Carnegie, Oklahoma to Basilisa and Martin Ramirez, and passed away Friday, October 9,2020 at his home in Carnegie. Apolinar or Polo as some may know him was raised in Carnegie where he attended Carnegie School and graduated the class of 1956. Polo later entered into the U.S. Army where he did a tour in France. He had an honorable discharge from the Army in 1960. He then worked approximately six years for a wheat harvest team driving trucks mostly in areas like Montana. He eventually met the love of his life back here in Oklahoma, Bessie C. Tsotigh Ramirez. They were joined together in marriage on April 26,1968. They settled into a home that they would share for many years in the town of Verden. Polo took up a job at the carpet mill Hollytex in Anadarko and retired from there several years later. Polo was an avid enthusiast for trains. He spent most of his free time just sitting at the nearest railroad track waiting on the next locomotive to come chugging by. If he wasn't chasing trains he was tinkering around in his shop or mowing the lawn. He was the Best PawPaw a kid could ask for and often times spoiled them to no end. He loved watching his grandson and granddaughter play sports. He will always be their number one fan. Polo went out of his way for his family and friends. He will be greatly missed by so many. He is preceded in death by his parents, several sisters, a son Paul Edward Ramirez, and one great- grandchild. He is survived by his wife Bessie C. Tsotigh Ramirez,of the home, one daughter Kristi Longhat and husband Micheal Longhat their two children Bryson and Kinley, of the home, one step daughter Jo Kathy Jordan, of Arkansas, two step sons Micheal and wife Wanona Satepauhoodle, of Chickasha, Wayne Satepauhoodle, of Chickasha, and Tonya Carnes, of Duncan. He is also survived by 11 grandchildren, 21 great-grandchildren, and 1 great-great- grandchild. Under the direction of Ray & Martha's Funeral Home, Carnegie, OK

Apolinar (Polo) Ramirez Apolinar Ramirez was born December 29, 1937 at his family home near Carnegie, Oklahoma to Basilisa and Martin Ramirez, and passed away Friday, October 9,2020 at his home in Carnegie. Apolinar or Polo as some may know... View Obituary & Service Information

The family of Apolinar Ramirez created this Life Tributes page to make it easy to share your memories.