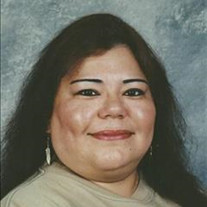 Anita Rae ( Starr) Keahbone, 46, of Anadarko, OK, entered into rest Wednesday, November 19, 2014, surrounded by family and friends. She was born January 2, 1968, at Lawton Indian Hospital to Thomas and Tessie (Satepauhoodle) Starr. Anita grew up in Carnegie and was raised Pentecostal and attended the White Church in Carnegie, along with many others. She was also a member of the Kiowa Tribe of Oklahoma. Anita gave birth to her only son, Jerry Wayne in 1983. She was united in marriage to Mark Keahbone, January 28, 2001, and made their home in Anadarko. Anita was a 1986 graduate from Carnegie High School. She went on to attend Caddo Kiowa Technology Center where she excelled academically in her classes. She majored in nursing and obtained her LPN license. Anita spent many years doing what she loved and that was helping others. She went on to make a career at Braum's in Anadarko. Over her seven years of working there, she met and made many friends, always welcoming everyone with a smile. She then became a stay at home wife due to health. She loved spending time with her dogs Bruiser, Missy and Alena. She also enjoyed spending her time baking for family. She enjoyed family gatherings and sightseeing. Anytime anyone needed anything she would always be one of the first ones to help. She will be missed by all who loved her. Survivors include her husband, Mark Keahbone, of the home son, Jerry Wayne Starr and spouse, Johnetta Brewster, Anadarko, OK two sisters, Deanna Michael and husband, Jerry, Carnegie, OK Allyson Starr, Indiana one brother, Thomas James Starr, Jr., and companion, Amanda, Carnegie, OK parents, Thomas Sr., and Tessie Starr, Carnegie, OK nieces, Terri Salazar, Breanne Gregory and Melina Michael nephews, Daniel Sikes, Louise Sikes, Eric Michael, Ethan Bearden and Thomas Starr, lll. She was preceded in death by paternal grandparents, David Sr. and Rosie Zotigh-Hall Starr, maternal grandparents, Adrian and Rose Hoaun Satepauhoodle, and numerous aunts, uncles and cousins. Wake Service: 7:00p.m., Tuesday, November 25, 2014 Funeral Service: 10:00a.m., Wednesday, November 26, 2014 Both services will be held at Ray & Martha's Chapel, Carnegie, OK Burial will follow at Memory Lane Cemetery, Anadarko, OK under the direction of Ray & Martha's Funeral Home, Carnegie, OK You may send online condolences to the family at RayAndMarthas.com

The family of Anita Rae Keahbone created this Life Tributes page to make it easy to share your memories.