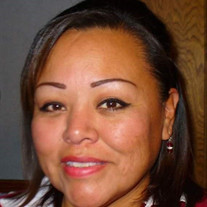 Angela Maria (Chaddlesone) McCarthy, 49, Citizen of the Kiowa Tribe and Anadarko, OK resident, passed Thursday, September 17, 2020, in Oklahoma City, OK. Angela, a direct descendant of Kiowa Chief Satanta, was born November 2, 1970, to Sherman and Adeline (Goodman) Chaddlesone in San Francisco, CA. She lived her early years with her mother's side of the family on the Kalispel Reservation and attended the Cusick schools before moving to Anadarko, OK. in 1983. Angela maintained many friendships and adored her relatives from that period of her life in Washington. In 1988, Angela graduated from Anadarko High School and attended the University of Oklahoma and was a Sooner fan. While at OU, Angela was a very active member of the Native American Club. She formed many close friendships in the Norman Native American community and lived in the area for several years. During this time, Angela joined the "powwow circuit" and often traveled around the region to participate in cultural gatherings and events. Angela spent some time living in Colorado. While in Boulder, CO she worked at the Native American Right Fund. Eventually, Angela decided to move back home to Anadarko, OK and began working for the Kiowa Tribe in various roles. She worked in housing and human resources and for the casino. Angela helped promote the development of the casino when it was still just an idea. She sat at educational booths, drove volunteers to promotional events, answered phones in the Lawton office and eventually was on site when the casino groundbreaking became a reality. She then worked at the casino as a marketing employee for several years before her physical health declined and forced her step out of the demanding role. Angela spent some years recovering from several health problems but she remained informed, engaged and active to the best of her abilities. Angela used computer platforms to promote causes in "Indian Country" and even made it to the Standing Rock Encampment in 2016 to demonstrate Kiowa solidarity with hundreds of other Native Nations. In 2018, Angela became the Kiowa Legislator for District 7. She was able to serve her district and Kiowas at large by carrying out the Kiowa Indian Council's recommendations. Angela had years of experience working for the tribe and also advocating for Indigenous Peoples in general and she was able to draw on that experience and knowledge in her role as Speaker of the Kiowa Legislator. Angela always fought for what she believed in and she believed very passionately in a better life for her Kiowa People. Angela was a member of the Grace Christian Fellowship church, Anadarko, OK. She was also a member of The North Spur Heights Handgame Team notorious across the Oklahoma handgame circuit as one of the keenest hiders. She is preceded in death by her father Sherman Chaddlesone, husband Mac McCarthy, Biological Grandmother Louise Abraham, Adopted Grandmother Alice Blackbear, Paternal Grandparents Alice Cherry Yellowhair and John Wesley Chaddlesone, Companion John Robedeaux. Survivors Include: Mother, Adeline (Goodman) Chaddlesone, OKC, OK Children: Synthea Sacheen Tofpi, OKC, OK; Tahli Tsistsistas Spottedwolf, his companion Ousk'v Lee Beaver, Anadarko, OK; Summer Angel Spottedwolf, Anadarko, OK; Melvin Harragarra, Redrock, OK; Lottie Robedeaux, Anadarko, OK; Chelsea Mitchell, Anadarko, OK; Jessie Mitchell, Anadarko, OK. Her Grandchildren: Daysha Lyn Tofpi, Dezaray Tofpi, Nevaeh Daugomah, Brielle Billie, Azariyah Reign Spottedwolf, Taiden John Robedeaux. Sisters: Shawndae Lawrence & Husband James L Lawrence Jr, OKC, OK; Alison Chaddlesone, OKC, OK; April Ignacio, AZ and a host of friends and family from Kalispel Reservation. Funeral: 2:00 p.m., Tuesday, September 22, 2020 Indian City Arena, Anadarko, OK The gates to Indian City will be open at 9:00 a.m. Tuesday, September 22, 2020. Angela Maria (Chaddlesone) McCarthy will be arrive at 1:00 p. m. Bring your Pow chairs and join us in the Celebration of Life. We are encouraging that all wear mask and respect social distancing. Under the direction of Ray and Martha's Funeral Home, Anadarko, OK

The family of Angela Maria (Chaddlesone) McCarthy created this Life Tributes page to make it easy to share your memories.