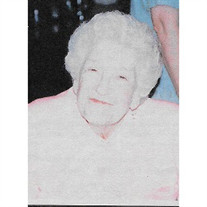 Amy Lorena Clark Brazil, 99, the daughter of Carl and Cuba Clark, was born on January 1st, 1919. She departed this life on March 19, 2018, for a Heavenly place where farming is easy! She married Estel (Buck) Brazil on September 10, 1939 in her parent's home in Port, Oklahoma. Vows were read by O.L. Bayless, pastor of First Baptist Church of Cordell. She was forced to carry a funeral spray because the florist had forgotten her bouquet! Lorena graduated valedictorian of her class from Port High School. She attended Oklahoma A.&M. for two years (1936-1938) and was forced to drop out when her family's house burned. After raising three children, she returned to college at Southwestern State University in Weatherford, Oklahoma where she received her Bachelors Degree in Elementary Education in 1959, and her Master's of Teaching Degree in School Counseling in 1968. After marriage she worked at the Agriculture Adjustment Administration office in Cordell (AAA). She was a member of the Business and Professional Women's Club. She and Buck lived two of their early years in Cheyenne, Oklahoma after spending a year in Stillwater, Oklahoma. Then they moved back to the Port Community in 1942 to farm. While teaching in Burns Flat for 12 years, Lorena was named Washita County Teacher of the Year in 1964. She conducted a Pilot Program of Elementary Guidance and Counseling which helped implement the concept of Developmental Vocational Guidance K-12. Later she worked at the Western Oklahoma Vocational-Technical School also in Burns Flat from 1971-1981. While there, she became the Vo-Tech Counselor and Director of Adult Education and Night Classes. Under her direction, the Adult Night Class enrollment grew from 188 students the first year to 1,258 for the 1980-81 school year. She retired in 1981 after a total of 22 years in education. Lorena was preceded in death by her husband, Buck; a stillborn daughter, Barbara; a son, Max and grandson, Scott Michael Brazil: her parents, Carl and Cuba Clark; and two brothers, William (Bill) C. Clark also known as Netus, and Raymond Lavern Clark. She is survived by Dr. Clark Brazil and wife, Micky of Wichita Falls, Texas, Carol Griffin and husband, Jim, of McKinney, Texas, and, daughter-in-law, Janice Brazil, of Murfressboro, Tennessee, and also by 10 grandchildren and several great-grandchildren, nieces, and cousins. Memorial Service: 2:00 p.m., Saturday, March 24, 2018 First Baptist Church Sentinel, Oklahoma Interment: Port Cemetery Port, Oklahoma

Amy Lorena Clark Brazil, 99, the daughter of Carl and Cuba Clark, was born on January 1st, 1919. She departed this life on March 19, 2018, for a Heavenly place where farming is easy! She married Estel (Buck) Brazil on September 10, 1939 in her... View Obituary & Service Information

The family of Amy Lorena Brazil created this Life Tributes page to make it easy to share your memories.