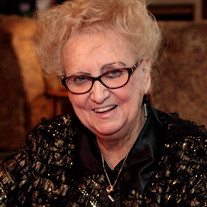 Alice ( Hall) Hill was born April 27, 1930 to Miles Ruben Hall and Lola ( McWhirter) Hall in Sentinel, OK. She grew up and attended school at Sentinel. She married JC Hill August 4th 1947 and to this union two children were born-a daughter, Dee Ann , and a son, Galen J. Alice and JC farmed in the Sentinel area their entire lives. She loved the farm and was very proud that they farmed the land her grandparents homesteaded. She and JC built a house on the original homestead land in 1957 and Alice lived there until 2015 when she moved to town. Alice gave her life to Jesus as a teenager at the Methodist Church in Lone Wolf. She became a member of the First Baptist Church of Sentinel in 1950 and loved, served, and supported the church faithfully her entire life. She taught children's sunday school for over 30 years. Many of those children still remember the flannel graph stories that she used to teach Bible stories. She also served as VBS director, directed children's Christmas programs, and was WMU president. Music was a large part of her life and she loved being a part of ensembles. She sang at first with Betty Hardwick, Omar Wax, and her dad, Ruben Hall. Later she sang as a part of The Joyful Noise with her daughter, Dee Ann, her granddaughter, Dia, and special friend, Joan Ridling. Alice also served on the board of directors for Southwest Baptist Church camp at Quartz Mountain for more than 20 years. The camp held a very special place in her heart. In the 1970's, Alice owned and operated The Country Store in downtown Sentinel. During that time, she served on the Sentinel Chamber of Commerce and was elected as its first female president. She was very honored to be chosen along with JC as parade marshalls for the 4th of July parade. She spent many hours organizing the 4th of July activities while serving on the chamber and called bingo well into her 80's. She loved Sentinel and was proud of her hometown. Alice loved working in her yard and spent countless hours planting trees, flowers, and shrubs and building flowerbeds, patios and walkways. Her granddaughters have many fond memories of spending time with her in the yard, playing while she worked. She also loved to decorate and fix up houses. Cooking was another thing Alice spent much time doing. She especially loved cooking at the holidays, making lots of yummy cakes, sweet breads, candy, and pies. Alice was a very generous person and had a heart for those who were less fortunate because she remembered what it was like to be that person. She spent many years with the ministerial alliance organizing Christmas food baskets for the needy families. She and JC also spent many Christmas seasons delivering presents, with JC as Santa and Alice as his elf. But the greatest joy of Alice's life was her family. Even though she was an only child, she loved her large extended family and stayed close with her cousins ,aunts, and uncles throughout her entire life. She had a very special and close relationship with her daughter Dee Ann. Growing up, her granddaughters, Dia and Donna, spent every Friday night, most Sunday afternoons, and more at her house. She never missed a ballgame, sheep show, singing performance, or piano recital. When the great-grandchildren were born, she converted her sunporch into a toy room and they all spent many happy hours with her playing trains and having tea parties. She never missed a chance to tell her family how much she loved them and how proud she was of them. Alice went home to be with her Jesus December 27, 2020. She was preceded in death by her parents, Ruben and Lola Hall, her husband, JC Hill, and infant son, Galen J Hill. She is survived and will greatly missed by her daughter, Dee Ann Evetts and husband Donnie of Sentinel, granddaughters Dia McGowen and husband Steven of Woodward and Donna Kinkead and husband Craig of Sentinel, and her beloved great-grandchildren, Blain Ball of Sentinel and Reese McGowen and Kinley McGowen of Woodward.

The family of Alice Hill created this Life Tributes page to make it easy to share your memories.