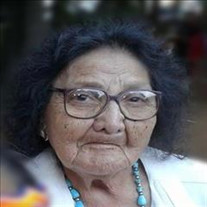 Ada Lorene Toppah (Tongkeahma) was born August 1, 1932 to Edgar "Cheevers" Toppah and Esther Lonewolf Toppah. She was born and raised south east of Carnegie, Ok on the Ida Wansey Hummingbird allotment. She made Carnegie her home until October 2019 when she resided at Glenhaven in Chickasha, OK. Our matriarch left for her heavenly home January 14, 2021. She attended Carnegie Schools all her life and graduated from Carnegie High School. Ada spent her life as a homemaker, caring for the needs of her kids and many others over the years. She spent her free time sewing and watching her sports or news-but she was also known for her cooking. One of her favorite pleasures was sitting at the drum singing; she loved gourd dance. Ada was a proud member of the Kiowa Tribe and of both the Botone Memorial Church and the Carnegie Victory Club. Ada is survived by her sons Edgar Toppah and Alex Ross of Carnegie, Oklahoma. "Momma Ada" / "Grandma Ada", being a woman with a devout heart, it is actually hard to put and exact number on how many other children, grandchildren and little brother & sisters she has; being a strong Kiowa woman her home was just as open as her heart was, and that alone is a testament to how much Godly faith she had. Ada is preceded in death by her husband Wallace Tongkeahma; her sons Allen Toppah, James Ross, Titus Toppah and Cliffod Tongkeamah; daughters Wanda Sue Hainta and Naomi Ruth Toppah; her brothers Simon Toppah, Lindy Toppah, Ernest "Iron" Toppah and D.K. Toppah; sisters Ruth Moore, Naomi Toppah, Carol "Squaggs" Toppah and Ila Toppah; grandparents Sam & Adah (Doyeto) Yellowhair Toppah and D.K. & Ida Wansey Lonewolf. Officiating will be Pastor Gerald Haunpo. Graveside services: 11:00 am, Monday, January 18, 2021 Cedar Creek Cemetery, Carnegie, OK Visitation: 1:00 p to 8:00 pm, Saturday, January 16, 2021 1:00 p to 8:00 pm, Sunday, January 17, 2021 Ray and Martha's Funeral Home, Carnegie, OK Under the direction of Ray and Martha's Funeral Home in Carnegie, OK.

Ada Lorene Toppah (Tongkeahma) was born August 1, 1932 to Edgar "Cheevers" Toppah and Esther Lonewolf Toppah. She was born and raised south east of Carnegie, Ok on the Ida Wansey Hummingbird allotment. She made Carnegie her home until October... View Obituary & Service Information

The family of Ada Lorene Toppah created this Life Tributes page to make it easy to share your memories.